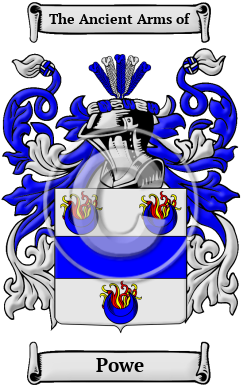 The first bearer of the name Powe most likely took on this name based on an early member of the family who was a peacock. It was a nickname given to people known for their florid manner and pride in their appearance. Nicknames were a broad and miscellaneous class of surnames, and were a type of hereditary surname. Nickname surnames referred to a characteristic of the first person who used the name. They can describe the bearer's favored style of clothing, appearance, habits, or character. Often nicknames described strong traits or attributes that people wished to emulate in a specific animal. In the pre-Christian era, many pagan gods and demigods were believed to be a mixture of animals and humans, such as the Greek god Pan who was the god of flocks and herds and was represented as a man with the legs, horns and ears of a goat. In the Middle Ages, anthropomorphic ideas, which attributed human qualities and form to gods or animals, were held about the characters of other living creatures. They were based on the creature's habits. Moreover, these associations were reflected in folk tales, mythology, and legends which portrayed animals behaving as humans.

Early Origins of the Powe family

The surname Powe was first found in Devon where they held a family seat as Lords of the Manor of Blackborough. The family can trace their ancestry to 846 in Brittany to the Lords of Poncar. Descended were the Viscounts of Poncar in the 11th century. Accompanying William the Conqueror at Hastings in 1066, they were granted lands in Devon.

In nearby Cornwall, "Poughill, or Pouguill, is simply Cornish, and signifies the country frequented with gulls, unless it be a deviation from Pouguillan which implies the low country; which latter term, from the situation of the parish in the county, does not seem to be very applicable." [1]

Early History of the Powe family

This web page shows only a small excerpt of our Powe research. Another 112 words (8 lines of text) covering the years 1172, 1299 and 1631 are included under the topic Early Powe History in all our PDF Extended History products and printed products wherever possible.

There are many spelling variations of Breton surnames, because the Old and Middle English languages lacked definite spelling rules. The official court languages, which were Latin and French, were also influential on the spelling of a surname. Since the spelling of surnames was rarely consistent in medieval times, and scribes and church officials recorded names as they sounded rather than adhering to any specific spelling rules, it was common to find references to one individual with many different spellings of their surname in the ancient chronicles. Moreover, a large number of foreign names were brought into England, which accelerated and accentuated the alterations to the spelling of various surnames. The name has been spelled Poe, Po, Poee, Pow, Pough and others.

More information is included under the topic Early Powe Notables in all our PDF Extended History products and printed products wherever possible.

In the United States, the name Powe is the 5,021st most popular surname with an estimated 4,974 people with that name. [3]

Migration of the Powe family to Ireland

Some of the Powe family moved to Ireland, but this topic is not covered in this excerpt. More information about their life in Ireland is included in all our PDF Extended History products and printed products wherever possible.

Powe migration to the United States +

Records show the name Powe in some of the earliest immigrant records of North America:

Powe Settlers in United States in the 18th Century

Powe Settlers in United States in the 19th Century