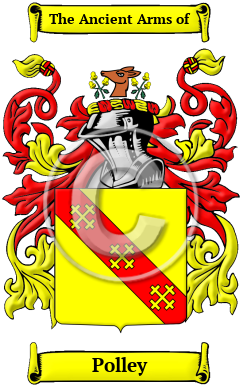 Early Origins of the Polley family

The surname Polley was first found in Cornwall where "in the ancient deeds of the Cornish family, the spellings Polwhele and Polhill are employed indifferently. The Polhills were certainly at Detling, co. Kent, in or before the reign of Edward II. An old spelling of the family was Polley." [1]

"Polwhele, the seat of an ancient family of this name, is in this parish. The present representative is the Rev. Richard Polwhele, who now resides at Kenwyn, of whose literary character we have already spoken. The ancestors of this gentleman are said to have settled here prior to the Norman Conquest. Drogo de Polwhele was chamberlain to the empress Maude, early in the twelfth century, perhaps not fifty years after the Conquest. Their ancient castle, William of Worcester described as in ruins, about the middle of the fifteenth century. No vestige of this building remains; and the manor house, until lately repaired, discovered the effects of age, and furnished strong intimations of having passed through better days." [2]

Once more into the archives we delved to find Walter de Polhey in the Feet of Fines for Essex in 1248; William de Poleye in the Hundredorum Rolls of 1273 for Berkshire; Elias de Polye, de Polee in the Hundredorum Rolls for Norfolk in 1275; William de Polleye in the Subsidy Rolls for Worcestershire in 1275; William Polleye in early Colchester record for 1346; and John Poley in the Assize Rolls for Essex in 1379. [3]

Early History of the Polley family

Notables of this surname at this time include: Margaret Polley (died 1555), English Protestant martyr from Rochester, Kent; Sir Edmund Poley (1619-1671), Member of Parliament for Bury St Edmunds; and his son, Henry Poley (1654-1707), an English Member of Parliament; and David Polhill (1674-1754), British politician, MP for Rochester, Bramber and Kent. Robert Poley, or Pooley (fl. 1568-1602), was an English double agent and government messenger employed...
Another 66 words (5 lines of text) are included under the topic Early Polley Notables in all our PDF Extended History products and printed products wherever possible.

In the United States, the name Polley is the 6,258th most popular surname with an estimated 4,974 people with that name. [4]

Polley migration to the United States +

Polley Settlers in United States in the 19th Century

Polley Settlers in United States in the 20th Century

Polley Settlers in Canada in the 20th Century

Polley Settlers in Australia in the 19th Century

Historic Events for the Polley family +