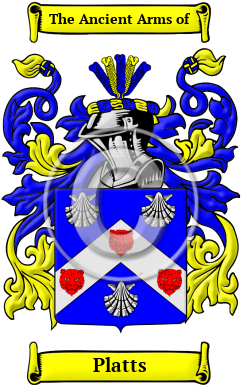 The ancestors of the Platts surname lived among the ancient Anglo-Saxon culture. The name comes from when they lived by a small patch of land. Platts is a topographic surname, which was given to a person who resided near a physical feature such as a hill, stream, church, or type of tree. Habitation names form the other broad category of surnames that were derived from place-names. They were derived from pre-existing names for towns, villages, parishes, or farmsteads.

Early Origins of the Platts family

The surname Platts was first found in Lancashire where they held a family seat from early times and their first records appeared on the early census rolls taken by the early Kings of Britain to determine the rate of taxation of their subjects.

Early History of the Platts family

Before English spelling was standardized a few hundred years ago, spelling variations of names were a common occurrence. Elements of Latin, French and other languages became incorporated into English through the Middle Ages, and name spellings changed even among the literate. The variations of the surname Platts include Platt, Plat, Platte, Plait, Plate, Blatt and others.

Notables of the family at this time include Sir Hugh Plat or Platt (1552-1608), English writer on agriculture and inventor from Garlickhythe; and John Platt (1632-1705), an English immigrant to America from Ware, Hertfordshire to settle in Norwalk, Connecticut and rose to become a Member of the General Court of the Colony of Connecticut from Norwalk (1678-1694.) Gabriel Plattes (fl. 1638), was an English writer, said to have been of Dutch extraction, was one of the earliest advocates...
Another 76 words (5 lines of text) are included under the topic Early Platts Notables in all our PDF Extended History products and printed products wherever possible.

Migration of the Platts family to Ireland

Some of the Platts family moved to Ireland, but this topic is not covered in this excerpt.
Another 57 words (4 lines of text) about their life in Ireland is included in all our PDF Extended History products and printed products wherever possible.

Platts migration to the United States +

Platts Settlers in United States in the 17th Century

Platts Settlers in United States in the 19th Century

Platts Settlers in Australia in the 19th Century

Platts Settlers in New Zealand in the 19th Century