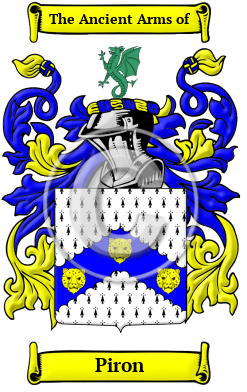 The distinguished surname Piron is thought to be derived from "Pyrton," the name of an ancient village located near Watlington in Oxfordshire which is itself derived from the Old English "pere-tun," meaning "pear-tree farm." [1]

While the aforementioned is the generally accepted point of origin for the family, the name could have been derived from "Saint Piran or Piranus (fl. 550), commonly identified with Saint Ciaran (fl. 500-560) of Saigir. The names Piran and Ciaran or Kieran are identical-p in Britain being the equivalent of the Irish k. The history of the two saints is in the main features the same, though the Irish lives of St. Ciaran do not record his migration to Cornwall. Piran holds a foremost place in Cornish hagiology; he was the patron saint of all Cornwall, or at least of miners; and his banner, a white cross on a black ground, is alleged to have been anciently the standard of Cornwall. According to Cornish legend it was Piran who discovered tin, and hence he was the patron saint of tinners. Three parishes in the county are dedicated to him, Perranzabuloe or Perran in the Sands, which is called Lampiran in Domesday, Perranuthnoe or Perran the Little near Marazion, and Perranarworthal on Falmouth Harbour; as well as chapels in other parishes such as Tintagel." [2]

Early Origins of the Piron family

The surname Piron was first found in Oxfordshire, where the Piron family held a family seat as Lords of the Manor. After the Battle of Hastings in 1066, William, Duke of Normandy, having prevailed over King Harold, granted most of Britain to his many victorious Barons. They adopted the Norman system of surnames which identified the under-tenant with his holdings so as to distinguish him from the senior stem of the family. Hence, conjecturally, the Piron family is descended from the tenant of the parish of Pyrton.

Early History of the Piron family

This web page shows only a small excerpt of our Piron research. Another 114 words (8 lines of text) covering the years 1166 and 1200 are included under the topic Early Piron History in all our PDF Extended History products and printed products wherever possible.

More information is included under the topic Early Piron Notables in all our PDF Extended History products and printed products wherever possible.

Piron Settlers in Canada in the 17th Century