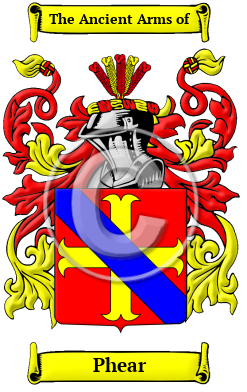 The Norman Conquest of England in 1066 brought many new words to England from which surnames were formed. Phear was one of these new Norman names. It was specifically tailored to its first bearer, who was a companion, friend. It derives from the Middle English word "feare," which means "the proud," "the fierce" or "the bold." [1]

Early Origins of the Phear family

The surname Phear was first found in Middlesex where they held a family seat from very early times and were granted lands by Duke William of Normandy, their liege Lord, for their distinguished assistance at the Battle of Hastings in 1066 A.D. They were originally descended from Vere from Manche in the arrondisement of Coutances in Normandy, and Aubrey de Vere was an undertenant in Kensington, Middlesex, and two places in Northampton. [2]

Early History of the Phear family

This web page shows only a small excerpt of our Phear research. Another 72 words (5 lines of text) are included under the topic Early Phear History in all our PDF Extended History products and printed products wherever possible.

A multitude of spelling variations characterize Norman surnames. Many variations occurred because Old and Middle English lacked any definite spelling rules. The introduction of Norman French to England also had a pronounced effect, as did the court languages of Latin and French. Therefore, one person was often referred to by several different spellings in a single lifetime. The various spellings include Fear, Fere and others.

More information is included under the topic Early Phear Notables in all our PDF Extended History products and printed products wherever possible.

Migration of the Phear family to Ireland

Some of the Phear family moved to Ireland, but this topic is not covered in this excerpt. More information about their life in Ireland is included in all our PDF Extended History products and printed products wherever possible.

Phear Settlers in Australia in the 19th Century