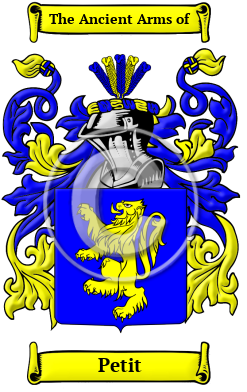 From the historical and enchanting region of France emerged a multitude of noble families, including the distinguished Petit family. Originally, the French people were known only by a single name. The process by which hereditary surnames were adopted in France is extremely interesting. Surnames evolved during the Middle Ages when people began to assume an extra name to avoid confusion and to further identify themselves. Often they adopted names that were derived from nicknames. Nickname surnames were derived from an eke-name, or added name. They usually reflected the physical characteristics or attributes of the first person that used the name. The name Petit is a nickname type of surname for a person of small stature, having derived from the Old French word "petit," meaning, "small" or "little".

Early Origins of the Petit family

The surname Petit was first found in Burgundy (French: Bourgogne), an administrative and historical region of east-central France where this distinguished family held a family seat at Bressey, where Antoine Petit was a knight of arms in the year 1353. They were also seated at Lavaux. They were strongly associated with the region of Champagne on the northern border of Bourgogne in eastern France. The first record in Bourgogne is at the seigneurie of Villiers-Sur-Suize where they held a family seat several centuries before the 15th century. In the 15th century Guyot Petit was Lord of the manor of Chaumont and a Lieutenant in the government of Nogent. This main stem of the family eventually emerged as the Barons Mathault.

Early History of the Petit family

This web page shows only a small excerpt of our Petit research. Another 97 words (7 lines of text) covering the years 1550, 1598, 1674, 1677, 1688, and 1750 are included under the topic Early Petit History in all our PDF Extended History products and printed products wherever possible.

Notable amongst the family at this time was Jean Petit (Jehan Petit, John Parvus) (c. 1360-1411), a French theologian and professor in the University of Paris, is known for his public defense of a political killing as tyrannicide; Pierre Petit (1598-1677), French mathematician; and Pierre Petit (1617-1687)...
Another 46 words (3 lines of text) are included under the topic Early Petit Notables in all our PDF Extended History products and printed products wherever possible.

Petit migration to the United States +

Petit Settlers in United States in the 17th Century

Petit Settlers in United States in the 18th Century

Petit Settlers in United States in the 19th Century

Petit Settlers in United States in the 20th Century

Petit Settlers in Canada in the 17th Century

Petit Settlers in Canada in the 18th Century

Petit Settlers in Canada in the 19th Century

Petit Settlers in Australia in the 19th Century

Petit Settlers in New Zealand in the 19th Century