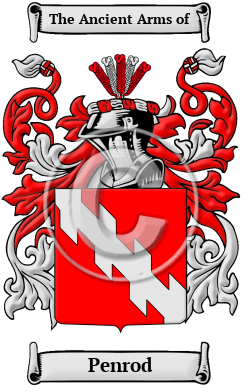 The Penrod surname is derived from the Middle English word "ruddock," in turn from the Old English "ruddoc," meaning "red;" and it has been suggested that the name was taken on as nickname for someone "robin-like." The surname no doubt also came from the place named Penruddock, a small village in the English county of Cumbria.

Early Origins of the Penrod family

The surname Penrod was first found in Cumberland where they held a family seat as Lords of the Manor. The Saxon influence of English history diminished after the Battle of Hastings in 1066. The language of the courts was French for the next three centuries and the Norman ambience prevailed. But Saxon surnames survived and the family name was first referenced in the 13th century.

Early History of the Penrod family

Distinguished members of the family include Colonel John Penruddock (Penruddocke) (1619-1655), an English Cavalier during the English Civil War and the English Interregnum, remembered as the leader...
Another 26 words (2 lines of text) are included under the topic Early Penrod Notables in all our PDF Extended History products and printed products wherever possible.

In the United States, the name Penrod is the 4,867th most popular surname with an estimated 4,974 people with that name. [1]

Migration of the Penrod family to Ireland

Some of the Penrod family moved to Ireland, but this topic is not covered in this excerpt.
Another 101 words (7 lines of text) about their life in Ireland is included in all our PDF Extended History products and printed products wherever possible.

Penrod migration to the United States +

Penrod Settlers in United States in the 20th Century