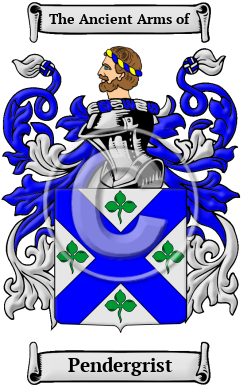 The origins of this surname remain uncertain. According to family lore, it was originally from a place named Brontegeest, near Ghent in Flanders. Form there, Flemish settlers took the name to Normandy, before arriving in Britain with the Norman invasion. The Pendergrist family lived in the village of Prendergast in the Welsh county of Pembroke.

Early Origins of the Pendergrist family

The surname Pendergrist was first found in Pembroke where Philip, son of a bearer of Prenliregast, a follower of the Conqueror was given the lands, which would encompass Prendergast Castle. There has long been a Prenegast family of this name in Berwickshire, which is said to come from these same roots. "Preenhirlegast is generally supposed to be synonymous with Prendergast, which family, soon after the Conquest, held possessions in the county of Pembroke, and at Akill, in Northumberland, which last estate its owners forfeited in 1327, by their adherence to the Scottish party. Maurice, Lord of Prendergast, near Pembroke, was one of the most eminent of Strongbow's companions in the conquest of Ireland. " [1]

Early History of the Pendergrist family

More information is included under the topic Early Pendergrist Notables in all our PDF Extended History products and printed products wherever possible.

Migration of the Pendergrist family to Ireland

Some of the Pendergrist family moved to Ireland, but this topic is not covered in this excerpt.
Another 71 words (5 lines of text) about their life in Ireland is included in all our PDF Extended History products and printed products wherever possible.

Migration of the Pendergrist family