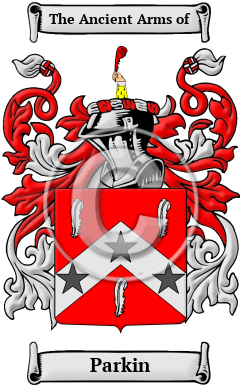 The ancestors of the name Parkin are thought to have lived among the Anglo-Saxon tribes of Britain. The name is derived from the baptismal name for the son of Peter. In the religious naming tradition surnames were bestowed in honor of religious figures or church officials. In Europe, the Christian Church was one of the most powerful influences on the formation of given names. Personal names derived from the names of saints, apostles, biblical figures, and missionaries are widespread in most European countries. In the Middle Ages, they became increasingly popular because people believed that the souls of the deceased continued to be involved in this world. They named their children after saints in the hope that the child would be blessed or protected by the saint. In this case the surname Parkin was taken from the ever popular St. Peter.

Early Origins of the Parkin family

The surname Parkin was first found in Lancashire where they held a family seat from early times and their first records appeared on the early census rolls taken by the early Kings of Britain to determine the rate of taxation of their subjects.

Early History of the Parkin family

This web page shows only a small excerpt of our Parkin research. Another 64 words (5 lines of text) covering the years 1567 and 1650 are included under the topic Early Parkin History in all our PDF Extended History products and printed products wherever possible.

Parkin has been spelled many different ways. Before English spelling became standardized over the last few hundred years, spelling variations in names were a common occurrence. As the English language changed in the Middle Ages, absorbing pieces of Latin and French, as well as other languages, the spelling of people's names also changed considerably, even over a single lifetime. Many variations of the name Parkin have been found, including Parkinson, Parkinsone, Parkison and others.

More information is included under the topic Early Parkin Notables in all our PDF Extended History products and printed products wherever possible.

Migration of the Parkin family to Ireland

Some of the Parkin family moved to Ireland, but this topic is not covered in this excerpt.
Another 59 words (4 lines of text) about their life in Ireland is included in all our PDF Extended History products and printed products wherever possible.

Parkin migration to the United States +

In an attempt to escape the chaos experienced in England, many English families boarded overcrowded and diseased ships sailing for the shores of North America and other British colonies. Those families hardy enough, and lucky enough, to make the passage intact were rewarded with land and a social environment less prone to religious and political persecution. Many of these families became important contributors to the young colonies in which they settled. Early immigration and passenger lists have documented some of the first Parkins to arrive on North American shores:

Parkin Settlers in United States in the 17th Century

Parkin Settlers in United States in the 19th Century

Parkin Settlers in Australia in the 19th Century

Parkin Settlers in New Zealand in the 19th Century

Parkin Settlers in West Indies in the 17th Century