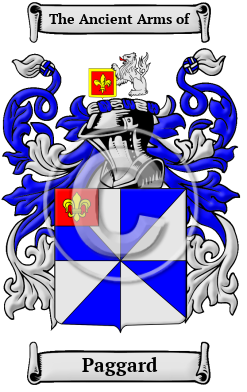 The ancestors of the first family to use the name Paggard lived among the ancient Scottish people called the Picts. The Paggard family lived in Picardy, a region of northern France. Bearers of the name made their way from Picardy and were "pike men" to England and Scotland. [1] [2]

Early Origins of the Paggard family

The surname Paggard was first found in Moray, where one of the first records of the family was Hugh Picard, who was a canon of Moray in 1266. A few years later, Stephen Pykard, was a knight of Gilbert de Umfraville, earl of Angus in 1279 and later still, John Pikard was juror on an inquest held at St. Andrews in 1302. Adam le Pycard was a Scottish prisoner of war from Stirling confined in Restormel Castle in 1305. Sir Patrick Picarde was rector of Torry in 1350. [6]

Early History of the Paggard family

This web page shows only a small excerpt of our Paggard research. Another 81 words (6 lines of text) covering the years 1150, 1350, 1430, 1436 and 1780 are included under the topic Early Paggard History in all our PDF Extended History products and printed products wherever possible.

In the Middle ages, spelling and translation were not yet regulated by any general rules. spelling variations in names were common even among members of one family unit. Paggard has appeared Pickard, Picard and others.

Another 47 words (3 lines of text) are included under the topic Early Paggard Notables in all our PDF Extended History products and printed products wherever possible.

Migration of the Paggard family

Faced by this persecution and the generally unstable political climate of those days, many Scots chose to leave their homeland for Ireland, Australia, and North America in search of greater opportunity and freedom. The colonies across the Atlantic were the most popular choice, but a passage there was neither cheap nor easily suffered. Passengers arrived sick and poor, but those who made it intact often found land and more tolerant societies in which to live. These brave settlers formed the backbone of the burgeoning nations of Canada and the United States. It is only this century that the ancestors of these families have begun to recover their collective identity through the patriotic highland games and Clan societies that have sprung up throughout North America. Research into early immigration and passenger lists revealed many immigrants bearing the name Paggard: Aaron Picard arrived in Philadelphia in 1869; Cyrus, Josiah, Nathaniel and William Picard settled in Philadelphia in 1852.