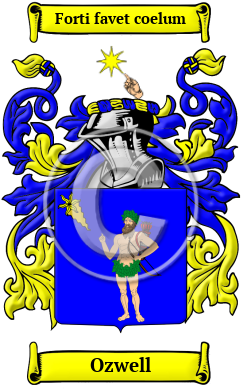 The roots of the Ozwell surname reach back to the language of the Viking settlers who populated the rugged shores of Scotland in the Medieval era. The Ozwell surname comes from someone having lived in Caithness. This ancient family claim descent from the Norse Asbaldr, but sometimes records show that the name may have been derived from the personal name Oswald which is made up of the Old English elements os meaning "god," and weald or "rule." [1]

Early Origins of the Ozwell family

The surname Ozwell was first found in Caithness (Gaelic: Gallaibh), the northern tip of Scotland, a Norse/Viking controlled region from the 9th century, which became the Earldom of Caithness, where they held a family seat from early times and their first records appeared on the census rolls taken by the ancient Kings of Scotland to determine the rate of taxation of their subjects.

Early History of the Ozwell family

This web page shows only a small excerpt of our Ozwell research. Another 107 words (8 lines of text) covering the years 189 and are included under the topic Early Ozwell History in all our PDF Extended History products and printed products wherever possible.

Spelling variations are extremely common among Scottish names dating from this era because the arts of spelling and translation were not yet standardized. Spelling was done by sound, and translation from Gaelic to English was generally quite careless. In different records, Ozwell has been spelled Oswald, Oswalde, Oswold, Oswolde, Oswell and others.

Notable amongst the Clan from early times was Saint Oswald (d. 972), Archbishop of York. He was a nephew on his father's side of Archbishop Odo, and related to Oskytel, Archbishop of York, was brought up under the care of Odo, and was instructed by Frithefode. "Having taken orders, he was enabled by Odo's liberality to purchase the monastery of Winchester, then in the hands of secular clerks or canons, over whom he ruled. Being zealous in piety and persuaded of the excellence of monastic life, he was discontented with his life as a secular clerk, and with his position as...
Another 107 words (8 lines of text) are included under the topic Early Ozwell Notables in all our PDF Extended History products and printed products wherever possible.

Migration of the Ozwell family to Ireland

Some of the Ozwell family moved to Ireland, but this topic is not covered in this excerpt.
Another 63 words (4 lines of text) about their life in Ireland is included in all our PDF Extended History products and printed products wherever possible.

Migration of the Ozwell family

Those who made the voyage were greeted with ample opportunity to acquire land and a political climate far away from the oppressive monarchy of the old country. They settled along the east coast of what would become Canada and the United States. In the American War of Independence, those who remained loyal to England traveled north to Canada as United Empire Loyalists. In this century, many Scots living in North America have begun to recover their rich heritage through festivals, highland games, and Clan societies. An examination of passenger and immigration lists has shown early immigrants bearing the name Ozwell: Henry Oswald who settled in Philadelphia, Pennsylvania in 1732; Barbara Oswald settled in New York state in 1835; Joseph Oswell settled in Virginia in 1716..