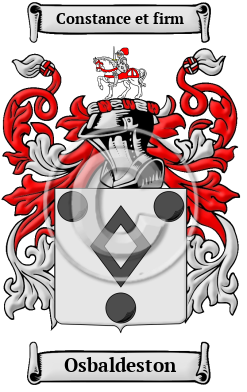 Osbaldeston is a name whose history is connected to the ancient Anglo-Saxon tribes of Britain. The name is derived from when the Osbaldeston family once lived in Osbaldeston, Lancashire. The place-name was recorded as Ossebaldistun c. 1200. Further research revealed that the name is derived from the Old English personal name Osbald with the suffix tun, which means "farm," added. The place-name means "farm belonging to Osbald."

Early Origins of the Osbaldeston family

The surname Osbaldeston was first found in Lancashire where they held a family seat from early times and their first records appeared on the early census rolls taken by the early Kings of Britain to determine the rate of taxation of their subjects.

Early History of the Osbaldeston family

Sound was what guided spelling in the essentially pre-literate Middle Ages, so one person's name was often recorded under several variations during a single lifetime. Also, before the advent of the printing press and the first dictionaries, the English language was not standardized. Therefore, spelling variations were common, even among the names of the most literate people. Known variations of the Osbaldeston family name include Osbaldeston, Osbaldeson, Osbaldston, Osburton and others.

Distinguished members of the family include Edward Osbaldeston (c. 1560-1594) an English ordained deacon who was arrested the day after giving his first Mass on the feast day of St. Jerome, at York and later hanged, drawn, and quartered on 16 November, 1594, for being a Catholic priest, one of the eighty-five martyrs of England and Wales beatified by Pope John Paul II; William Osbaldeston or Osbolston (1577-1645)...
Another 67 words (5 lines of text) are included under the topic Early Osbaldeston Notables in all our PDF Extended History products and printed products wherever possible.

Migration of the Osbaldeston family to Ireland

Some of the Osbaldeston family moved to Ireland, but this topic is not covered in this excerpt.
Another 69 words (5 lines of text) about their life in Ireland is included in all our PDF Extended History products and printed products wherever possible.

Osbaldeston Settlers in New Zealand in the 19th Century