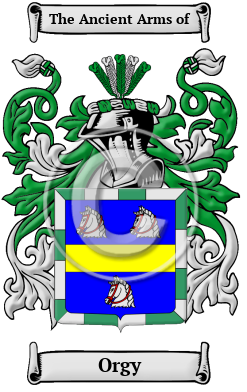 Notable amongst the family name during their early history was Sir John Horsey (died 1546), knight of Henry VIII and Lord of the Manor of Clifton Maubank. Sir Edward Horsey (d. 1583), was a naval and military commander, a member of a family of considerable note in Dorsetshire, connected with Clifton Maubank (now Maybank), Wyke in Sherborne, and Melcombe Horsey, was the son of Jasper Horsey of Exton, who was brother of Sir John Horsey. [11] Sir Jerome Horsey (fl. 1573-1627), was an English traveller, son of...
Another 85 words (6 lines of text) are included under the topic Early Orgy Notables in all our PDF Extended History products and printed products wherever possible.