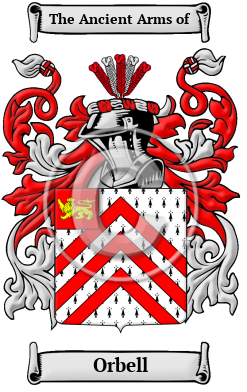 Early Origins of the Orbell family

The surname Orbell was first found in Lincolnshire at Orby, a village and civil parish in the marshes of the Lincolnshire coast. The place dates back to the Domesday Book where it was listed as Heresbi, land held at the time by the Bishop of Durham. By 1115, the place name had evolved to Orreby and literally meant "farmstead or village of a man called Orri," derived from the Old Scandinavian personal name + "by." [1]

Early History of the Orbell family

This web page shows only a small excerpt of our Orbell research. Another 129 words (9 lines of text) covering the years 1316 and 1658 are included under the topic Early Orbell History in all our PDF Extended History products and printed products wherever possible.

More information is included under the topic Early Orbell Notables in all our PDF Extended History products and printed products wherever possible.

Orbell Settlers in New Zealand in the 19th Century