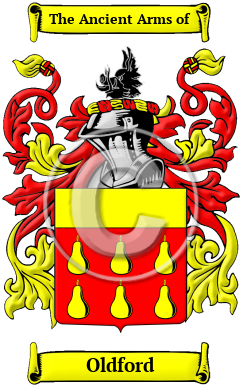 The ancestors of the Oldford surname lived among the ancient Anglo-Saxon culture. The name comes from when they lived beside or close to an old ford.

Early Origins of the Oldford family

The surname Oldford was first found in Lincolnshire at Alford, a market-town and parish, in the union of Spilsby, Wold division of the hundred of Calceworth. [1] The place name derives its name from an old ford over a stream that twice runs through it. The first record of the place name was found in the Domesday Book of 1086 where it was listed as Alforde. [2]

Alford Manor House is located there and is believed to be the largest thatched manor house in England, built about 1611. Alford Windmill is a five-sailed windmill, the only survivor of the four original windmills that operates today grinding grain to organic flour.

Alford is also a village and parish on the River Alham, in Somerset. This latter local was listed in the Domesday Book as Aldedeford and in this case it literally meant "ford of a woman called Ealdgyth." [3] "In the 9th of Elizabeth, Francis Alforde claimed the manor [of Widness with Appleton in Lancashire] by grant from the queen." [1]

Another Alford is found in Surrey where it is a village and civil parish on the West Sussex border. It is difficult to determine which of these parishes was the original home of this family, but more than likely the Lincolnshire estates were the first owned by the family group. The family later migrated to Berkshire, where it became a family of great prominence.

Early History of the Oldford family

Before English spelling was standardized a few hundred years ago, spelling variations of names were a common occurrence. Elements of Latin, French and other languages became incorporated into English through the Middle Ages, and name spellings changed even among the literate. The variations of the surname Oldford include Allford, Alford, Aleford, Aldeford, Alforde, Allferd, Alferd, Allforth, Alforth, Alsford and many more.

Notables of the family at this time include Michael Alford (1587-1652), a Jesuit and ecclesiastical historian, whose real name was Griffiths, was born in London in 1587; John Alford (c. 1590-1649), an English landowner and politician who sat in the House of Commons between 1626 and 1648; Sir Edward Alford (ca. 1595-1653), an English landowner and politician who sat...
Another 58 words (4 lines of text) are included under the topic Early Oldford Notables in all our PDF Extended History products and printed products wherever possible.

In Newfoundland, Canada, the name Oldford is the 194th most popular surname with an estimated 215 people with that name. [4]

Migration of the Oldford family

A great wave of immigration to the New World was the result of the enormous political and religious disarray that struck England at that time. Families left for the New World in extremely large numbers. The long journey was the end of many immigrants and many more arrived sick and starving. Still, those who made it were rewarded with an opportunity far greater than they had known at home in England. These emigrant families went on to make significant contributions to these emerging colonies in which they settled. Some of the first North American settlers carried this name or one of its variants: Richard Alford, who settled in Virginia in 1624; at the age of 26. He was followed by John, also to Virginia in 1663; and Nico Alford who settled in St. Christopher, Florida, in 1635..

Historic Events for the Oldford family +