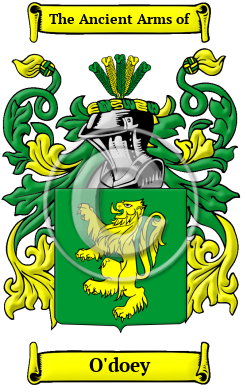 The original Gaelic form of O'doey was O Dubhthaigh. The first portion of the name is the word "dubh," which means "black," while the second portion is likely an obsolete Irish forename. The sept claim descent from the ancient Heremon Kings of Ireland. Through O'Conner Faley, Lords of Offaley (now Offaly), they descend from "Cahir Mor, King of Leinster in the beginning of the second century. He divided his great possessions amongst his thirty sons in a Will called 'The will of Cahir More,' contained in the 'Book of Leacan' and in the 'Book of Balymote.' His posterity formed the principal families in Leinster." [1] O'Duffy was listed as one of these such families.

Early Origins of the O'doey family

The surname O'doey was first found in Connacht (Irish: Connachta, (land of the) descendants of Conn), where they held a family seat from very ancient times, and were one of the many families descended from the great Kings of Ireland called the "Three Collas." Descending from the Clan Colla was Duffy, Lord of Fermanagh.

Early History of the O'doey family

Before widespread literacy came to Ireland, a name was often recorded under several different variations during the life of its bearer. Accordingly, numerous spelling variations were revealed in the search for the origin of the name O'doey family name. Variations found include Duffey, Duff, Duffy, O'Duffey, O'Duffy, Duffe, O'Duffe, Doey, Dohey, Doohey, O'Dowey and many more.

Prominent amongst the family at this time was Father Eugene O'Duffy (c. 1527-1615), preacher and satirist on the apostate bishop Miler Magrath; The Most Reverend Patrick...
Another 26 words (2 lines of text) are included under the topic Early O'doey Notables in all our PDF Extended History products and printed products wherever possible.

Migration of the O'doey family

To escape the religious and political discrimination they experienced primarily at the hands of the English, thousands of Irish left their homeland in the 19th century. These migrants typically settled in communities throughout the East Coast of North America, but also joined the wagon trains moving out to the Midwest. Ironically, when the American War of Independence began, many Irish settlers took the side of England, and at the war's conclusion moved north to Canada. These United Empire Loyalists, were granted land along the St. Lawrence River and the Niagara Peninsula. Other Irish immigrants settled in Newfoundland, the Ottawa Valley, New Brunswick and Nova Scotia. The greatest influx of Irish immigrants, however, came to North America during the Great Potato Famine of the late 1840s. Thousands left Ireland at this time for North America and Australia. Many of those numbers, however, did not live through the long sea passage. These Irish settlers to North America were immediately put to work building railroads, coal mines, bridges, and canals. Irish settlers made an inestimable contribution to the building of the New World. Early North American immigration records have revealed a number of people bearing the Irish name O'doey or a variant listed above, including: Alice Duffey who landed in Maryland in 1724. In Newfoundland, Philip Duffy settled in Harbour Grace in 1827; Thomas Duffey settled in St. John's in 1829.