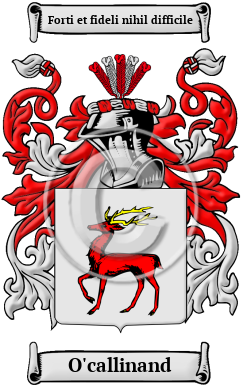 The many Irish surnames in use today have long rich histories behind them. The name O'callinand originally appeared in Gaelic as Mac Carthaigh, which is derived from the word "carthach," which means "loving."

Early Origins of the O'callinand family

The surname O'callinand was first found in County Kerry and much of County Cork, in the area formerly known as Desmond. One of the oldest and most important of all Irish families, the MacCarthy family claim descent from Oilioll Olum, the 3rd century King of Munster who gave the region of Desmond to his son Eoghan after his death. Eoghan's descendants were known as the Eoghanacht, and the surname MacCarthy is derived from Carthach, an 11th century lord of this group who was killed when the Lonegans set his house on fire.

Early History of the O'callinand family

The scribes who created documents long before either the Gaelic or English language resembled their standardized versions of today recorded words as they sounded. Consequently, in the Middle Ages the names of many people were recorded under different spellings each time they were written down. Research on the O'callinand family name revealed numerous spelling variations, including MacCarthy, MacCarty, MacArty, MacArthy and others.

Notable among the family name at this time was Blessed Thaddeus McCarthy (c. 1455-1492), an Irish ecclesiastic who never ruled his see, Bishop of Ross, Ireland in 1492 and Bishop of Cork and Cloyne in 1490, his feast day is 25 October; Charles MacCarty (Cormac Oge McCarthy), (d. 1640). He was from the ancient line of Dermot McCarthy, King of Munster, and was created the 1st Viscount Muskerry in 1628. His motto was "Forti et fideli nihil difficile, " which translates as "to the strong and faithful, nothing is...
Another 89 words (6 lines of text) are included under the topic Early O'callinand Notables in all our PDF Extended History products and printed products wherever possible.

Migration of the O'callinand family

Under the rule of England, land ownership in Ireland changed dramatically, and many native Irish families found themselves renting out land to farm from absentee owners. This was one of the prime reasons that immigration to North America began in the late 18th century: Irish farmers dreamed of owning their own parcel of land to work for themselves. At this point, the immigrants were at least of modest means for the passage across the Atlantic was often quite dear. In the 1840s the Great Potato Famine created an exodus of people of quite different means. These people were most often destitute: they either sold anything they had to gain a passage or they were sponsored by philanthropic societies. Many of these immigrants were sick from disease and starvation: as a result many did not survive the long transatlantic journey. Although those settlers that did survive were often despised and discriminated against by people already established in these nations, they were critical to rapid development of the powerful industrial nations of the United States and the country that would later become known as Canada. An examination of immigration and passenger lists shows many persons bearing the name of O'callinand or one of its variants: Daniel McCarty, who came to Boston in 1742; David McCarty, who settled in Maryland in 1755; Alexander McCarthy, recorded in the New York Colonial Muster Rolls in 1760.