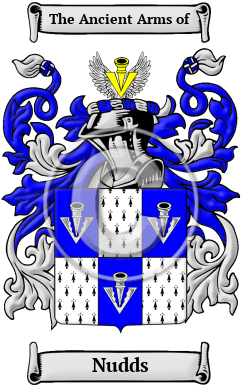 The origins of the name Nudds are with the Anglo-Saxon tribes of Britain. The name is derived from Cnute, a popular name in England in the early Middle Ages. It was popular thanks to the influence of Cnut, a Dane, who became King of England in 1016. "There are two Cnuts in Domesday, one in Yorkshire, the other in Derbyshire." [1]

Alternatively, it may be of nickname origin, from the Old English word hnutu, which meant brown, and would have been given to someone with a brown complexion. It may be that this is the origin of the English saying "Brown as a nut," used for someone who has spent a lot of time in the sun.

Early Origins of the Nudds family

The surname Nudds was first found in Gloucestershire where they held a family seat from early times and their first records appeared on the early census rolls taken by the early Kings of Britain to determine the rate of taxation of their subjects.

Early History of the Nudds family

The first dictionaries that appeared in the last few hundred years did much to standardize the English language. Before that time, spelling variations in names were a common occurrence. The language was changing, incorporating pieces of other languages, and the spelling of names changed with it. Nudds has been spelled many different ways, including Nutt, Nudd, Nutting, Knutt, Nuttman, Nutter and others.

Distinguished members of the family include John Nutt (1605-1668), an English politician who sat in the House of Commons from 1640 to 1653; and John Nutt (fl. 1620-1623), English pirate born in Devon who raided the Newfoundland and western England for three years before his capture by Sir John Eliot in 1623. His arrest and conviction caused a scandal in the English court as Nutt had paid Eliot £500 in exchange for a pardon. He was eventually released by the Secretary of State George Calvert. He arrived at Torbay Newfoundland in 1620 aboard the ship Dartmouth in 1620, but soon organized...
Another 204 words (15 lines of text) are included under the topic Early Nudds Notables in all our PDF Extended History products and printed products wherever possible.

Migration of the Nudds family to Ireland

Some of the Nudds family moved to Ireland, but this topic is not covered in this excerpt.
Another 31 words (2 lines of text) about their life in Ireland is included in all our PDF Extended History products and printed products wherever possible.

Migration of the Nudds family

Thousands of English families in this era began to emigrate the New World in search of land and freedom from religious and political persecution. Although the passage was expensive and the ships were dark, crowded, and unsafe, those who made the voyage safely were rewarded with opportunities unavailable to them in their homeland. Research into passenger and immigration lists has revealed some of the very first Nuddss to arrive in North America: James Nutt and his wife Rebecca settled with their three children in New York in 1739; Thomas and William Nudd settled in Barbados in 1663; William Nutt settled in Virginia in 1636.