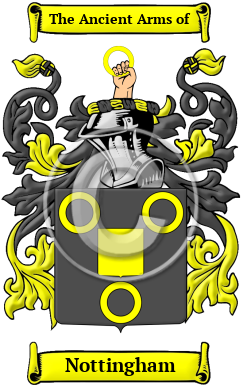 The Nottingham surname is a habitational name, taken on from the city of Nottingham in the East Midlands.

Early Origins of the Nottingham family

In Scotland, Henricus de Nothingham, was canon of Caithness who witnessed a charter of Johannes Fraser de Glenwyn in 1272. He "probably derived his name from Nothingham (in 1408 Nothigane) in the parish of Latheron, Caithness, now Nottingham." [3]

William of Nottingham (d. 1251), was a "Franciscan [who] entered the Minorite order in his youth. His parents seem to have been in a good position, but even as a boy he played at begging for the love of God with his comrades. His brother, Augustine, also became a Franciscan, entered the service of Pope Innocent IV, and was made Bishop of Laodicea. William acted as vicar of Haymo, the English provincial, in 1239, and was himself elected fourth provincial minister in 1240. In 1244 he went to the Roman court, and obtained a papal letter to restrain the proselytising activity of the Dominicans. William appears in the chronicle of his friend, Thomas of Eccleston as a man of sound sense, considerable humour, and force of character, hating crooked courses, a faithful friend to those in trouble. " [4]

Early History of the Nottingham family

This web page shows only a small excerpt of our Nottingham research. Another 119 words (8 lines of text) covering the years 1169, 1427, 1558 and 1718 are included under the topic Early Nottingham History in all our PDF Extended History products and printed products wherever possible.

Spelling variations of this family name include: Nottingham, Nottinham, Notham, Nottham, Notingham and others.

More information is included under the topic Early Nottingham Notables in all our PDF Extended History products and printed products wherever possible.

In the United States, the name Nottingham is the 6,851st most popular surname with an estimated 4,974 people with that name. [5]

Nottingham migration to the United States +

Nottingham Settlers in United States in the 17th Century

Nottingham Settlers in United States in the 18th Century

Nottingham Settlers in United States in the 19th Century

Nottingham Settlers in Australia in the 19th Century