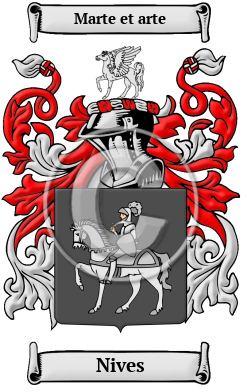 Early Origins of the Nives family

The surname Nives was first found in Angus (Gaelic: Aonghas), part of the Tayside region of northeastern Scotland, and present day Council Area of Angus, formerly known as Forfar or Forfarshire, where they held a family seat in the parish of Nevay, now called Essie. The name became interchangeably Nevay and Nevoy. The first on record was Adam of Neveth who perambulated (staked) his territories between the lands of the Abbey of Arbroath and Kinblemonth in 1219.

Early History of the Nives family

This web page shows only a small excerpt of our Nives research. Another 97 words (7 lines of text) covering the years 1453, 1558, 1579 and 1647 are included under the topic Early Nives History in all our PDF Extended History products and printed products wherever possible.

Spelling variations of this family name include: Nevoy, Nevay, Nave, Navay, Navy, Neve and others.

More information is included under the topic Early Nives Notables in all our PDF Extended History products and printed products wherever possible.

Migration of the Nives family

Some of the first settlers of this family name or some of its variants were: Samuel Neve who settled in Barbados in 1682; William Neve and child arrived in New York in 1822; Allie Navy settled in Boston Massachusetts in 1849; Alexander Nave arrived in Maryland in 1716.