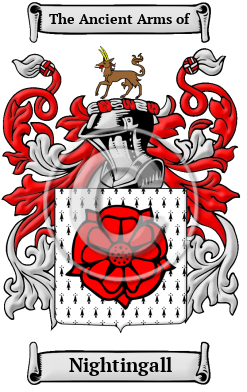 The Norman Conquest of England in 1066 brought many new words to England from which surnames were formed. Nightingall was one of these new Norman names. It was specifically tailored to its first bearer, who was a person with a good singing voice. The name is a metaphor likening the original bearer of the name to the nocturnal songbird called a nightingale. Its name is derived from the Old English words niht, meaning night, and galan, meaning to sing.

"The name 'night-in-gale' seems peculiarly inappropriate to the bird that sings in the calmest of midsummer nights. The stormy petrel may be blown upon the gale and the cry of the screeching owl may be heard above the noise of the wind, but this bird, the sweetest singer of the woodland, loves profound silence. We find that the termination 'gale' is from the Anglo-Saxon 'galan,' to sing, we can understand that this is the bird who passes the 'night-in-song.' " [1]

Early Origins of the Nightingall family

The surname Nightingall was first found in Norfolk where the Hundredorum Rolls of 1273 listed Ralph Niktegale as holding lands there at that time. A few years later, Thomas Nightegale was listed in Gloucestershire in 1286 and Andreas Nightyngale, was Mmeber of Parliament for Cricklade, Wiltshire in 1307. [2]

Early History of the Nightingall family

This web page shows only a small excerpt of our Nightingall research. Another 83 words (6 lines of text) covering the years 1645, 1627, 1947 and 1722 are included under the topic Early Nightingall History in all our PDF Extended History products and printed products wherever possible.

A multitude of spelling variations characterize Norman surnames. Many variations occurred because Old and Middle English lacked any definite spelling rules. The introduction of Norman French to England also had a pronounced effect, as did the court languages of Latin and French. Therefore, one person was often referred to by several different spellings in a single lifetime. The various spellings include Nightingale, Nightingall, Nightengale and others.

Outstanding amongst the family at this time was Sir Thomas Nightingale (d.1645), High Sheriff of Essex in 1627. He was the progenitor of the Nightingale Baronetcy of Newport Pond. This baronetcy has continued from the inception to today when Sir Charles Manners Gamaliel Nightingale is the 17th Baronet...
Another 48 words (3 lines of text) are included under the topic Early Nightingall Notables in all our PDF Extended History products and printed products wherever possible.

Migration of the Nightingall family to Ireland

Some of the Nightingall family moved to Ireland, but this topic is not covered in this excerpt. More information about their life in Ireland is included in all our PDF Extended History products and printed products wherever possible.

Migration of the Nightingall family

Many English families left England, to avoid the chaos of their homeland and migrated to the many British colonies abroad. Although the conditions on the ships were extremely cramped, and some travelers arrived diseased, starving, and destitute, once in the colonies, many of the families prospered and made valuable contributions to the cultures of what would become the United States and Canada. Research into the origins of individual families in North America has revealed records of the immigration of a number of people bearing the name Nightingall or a variant listed above: Thomas Nightingale, who came to Virginia in 1648; Kathleen Nitingale settled in Virginia with her husband in 1649; Henry Nightingale, who came to Charleston in 1792.