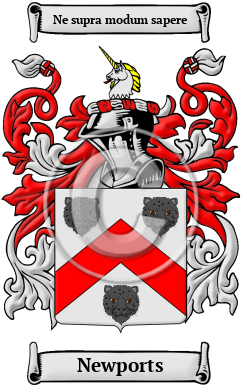 The Newports surname is a habitational name taken on from any of several places so called, derived the Old English words "ne-owe," meaning "new," and "port," meaning "a port." [1]

There are no fewer than five parishes named Newport throughout England with Essex and Devon as the most likely origin of the family. [2] The oldest is Newport, Essex which dates back to the Domesday Book of 1086 when it was known as Neuport. [3]

Newport, Monmouthshire was "called by Giraldus Novus Burgus, or New Town, in contradistinction to the ancient city of Caerleon, [and] arose out of the declining greatness of that celebrated station. Here Robert, Earl of Gloucester, natural son of Henry I., erected a castle for the defence of his possessions, denominated Castell Newydd, or New Castle: from him it descended through several noble families, till, on the execution of Edward, Duke of Buckingham, it was seized, together with the lordship, by Henry VIII." [5]

Early Origins of the Newports family

The surname Newports was first found in Essex at Newport, a parish, and formerly a market-town, in the union of Saffron-Walden, hundred of Uttlesford. "This manor, in the time of Edward the Confessor, belonged to Earl Harold, and afterwards, forming part of the demesnes of William the Conqueror, continued in the possession of the crown till the reign of Edward VI., when it was granted, as parcel of the duchy of Cornwall, to Richard Fermor." [5]

Ailwin de Niweport was the first on record. He was listed in the Pipe Rolls for Essex in 1177. Later, Nicholas Neuport was listed in Devon in 1359. [6]

Early History of the Newports family

It is only in the last few hundred years that the English language has been standardized. For that reason, early Anglo-Saxon surnames like Newports are characterized by many spelling variations. As the English language changed and incorporated elements of other European languages, even literate people changed the spelling of their names. Scribes and monks in the Middle Ages spelled names they sounded, so it is common to find several variations that refer to a single person. The variations of the name Newports include: Newport, Newports and others.

Migration of the Newports family to Ireland

Some of the Newports family moved to Ireland, but this topic is not covered in this excerpt. More information about their life in Ireland is included in all our PDF Extended History products and printed products wherever possible.

Migration of the Newports family

Many English families tired of political and religious strife left Britain for the new colonies in North America. Although the trip itself offered no relief - conditions on the ships were extremely cramped, and many travelers arrived diseased, starving, and destitute - these immigrants believed the opportunities that awaited them were worth the risks. Once in the colonies, many of the families did indeed prosper and, in turn, made significant contributions to the culture and economies of the growing colonies. An inquiry into the early roots of North American families has revealed a number of immigrants bearing the name Newports or a variant listed above: John Newport, who settled in Virginia in 1648; John Newport, who settled in Barbados in 1678 with his wife and child; and John Newport, who came to Virginia in 1725..