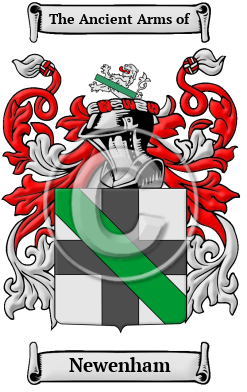 The name Newenham is of Anglo-Saxon origin and came from when the family lived in one of several places called Newnham throughout England. The place-name is derived from the Old English elements niwe, which means new, and ham, which means farm or village. [1]

Early Origins of the Newenham family

The surname Newenham was first found in Cambridgeshire where Ralph de Neunenham was listed in the Hundredorum Rolls of 1273. [3]

Early History of the Newenham family

This web page shows only a small excerpt of our Newenham research. Another 122 words (9 lines of text) covering the years 1400, 1576, 1743, 1750 and 1806 are included under the topic Early Newenham History in all our PDF Extended History products and printed products wherever possible.

It is only in the last few hundred years that the English language has been standardized. For that reason, early Anglo-Saxon surnames like Newenham are characterized by many spelling variations. As the English language changed and incorporated elements of other European languages, even literate people changed the spelling of their names. Scribes and monks in the Middle Ages spelled names they sounded, so it is common to find several variations that refer to a single person. The variations of the name Newenham include: Newnam, Newnham, Newenham, Newengham, Newnhom, Newnom and many more.

More information is included under the topic Early Newenham Notables in all our PDF Extended History products and printed products wherever possible.

Migration of the Newenham family to Ireland

Some of the Newenham family moved to Ireland, but this topic is not covered in this excerpt.
Another 63 words (4 lines of text) about their life in Ireland is included in all our PDF Extended History products and printed products wherever possible.

Newenham Settlers in Australia in the 19th Century