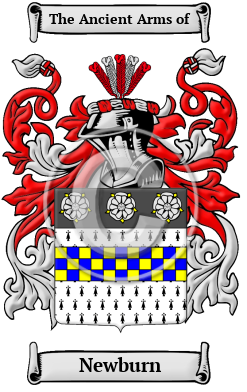 The name Newburn was brought to England in the wave of migration that followed the Norman Conquest of 1066. The Newburn family lived in Neufbourg, Normandy. "Henry de Newburgh (so named from the castle of Neufbourg, where he was born) was the younger son of Roger de Bellomont Earl of Mellent, and the brother of Robert, afterwards Earl of Leicester. He himself obtained the Earldom of Warwick towards the latter end of the Conqueror's reign, ' when,' says Dugdale, 'King William, having begirt Warwick with a mighty ditch, for the precinct of its walls, and erected the gates at his own charge, did promote this Henry to the earldom, and annexed thereto the royalty of the borough, which at that time belonged to the crown.' Here, 'upon the site of the tower illustrated by the traditions of Guy, the great opponent of the Danes,' he built his castle, which, enlarged and strengthened during the long succession of its powerful lords, became one of the most renowned of English fortresses, and remains 'the glory of the Midland shires. ' William Rufus further bestowed upon him all the lands that had belonged to his Saxon predecessor Thurkill, whose daughter and heir Margaret, Leland tells us, he had married. " [1]

Early Origins of the Newburn family

The surname Newburn was first found in Warwickshire. It is generally thought that the "founder of this family was Henry de Newburgh, so called from the castle of that name in Normandy, a younger son of Roger de Bellomonte, Earl of Mellent. He came in [to England] with the Conqueror, and was created Earl of Warwick. " [3]

Early History of the Newburn family

This web page shows only a small excerpt of our Newburn research. Another 104 words (7 lines of text) covering the years 126 and 1267 are included under the topic Early Newburn History in all our PDF Extended History products and printed products wherever possible.

Spelling variations in names were a common occurrence in the eras before English spelling was standardized a few hundred years ago. In the Middle Ages, even the literate regularly changed the spellings of their names as the English language incorporated elements of French, Latin, and other European languages. Many variations of the name Newburn have been found, including Newborough, Newburgh and others.

More information is included under the topic Early Newburn Notables in all our PDF Extended History products and printed products wherever possible.

In the United States, the name Newburn is the 13,695th most popular surname with an estimated 2,487 people with that name. [5]

Migration of the Newburn family

For many English families, the social climate in England was oppressive and lacked opportunity for change. For such families, the shores of Ireland, Australia, and the New World beckoned. They left their homeland at great expense in ships that were overcrowded and full of disease. Many arrived after the long voyage sick, starving, and without a penny. But even those were greeted with greater opportunity than they could have experienced back home. Numerous English settlers who arrived in the United States and Canada at this time went on to make important contributions to the developing cultures of those countries. Many of those families went on to make significant contributions to the rapidly developing colonies in which they settled. Early North American records indicate many people bearing the name Newburn were among those contributors: E. P. Newbrough settled in San Francisco in 1850; Thomas NewBerry settled in New England in 1630; John Newberry settled in New York in 1775.