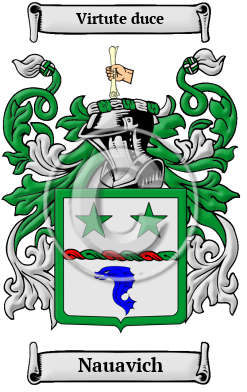 The noble name Nauavich was first used by the Boernicians, an ancient Scottish tribe. It is a name for a person who was the elder of two people, [1] bearing the same name or the name could have been derived from the Old English "ealdra," meaning "elder." Alternatively, the name could have a nickname for someone who was a "dweller at, or near, an elder tree." [2]

Early Origins of the Nauavich family

The surname Nauavich was first found in Edinburghshire, a former county, now part of the Midlothian council area. One of the first records of the family was John Eldar or Eldare de Corstorfin who was burgess of Edinburgh in 1423 and "the surname is also recorded in Aberdeen in 1447. John Elder, a renegade Scot, urged Henry VIII ('Bagcheeks') to invade Scotland, assuring him of the support of the Highland Clans. Andro Elder, was a reidare at Menmure in 1574." [3]

Early History of the Nauavich family

This web page shows only a small excerpt of our Nauavich research. Another 74 words (5 lines of text) covering the years 1555, 1542, 1680, 1700 and are included under the topic Early Nauavich History in all our PDF Extended History products and printed products wherever possible.

Before the first dictionaries and printing presses went into use in the last few hundred years, spelling, particularly of names, was a largely intuitive matter. Consequently, many spelling variations occur in even the simplest names from the Middle Ages. Nauavich has been spelled Elder, Elders, Eldar, MacNoravaich and others.

Notable amongst the family at this time was John Elder ( fl. 1555), Scottish writer, a native of Caithness who passed twelve years of his life at the universities of St. Andrews, Aberdeen, and Glasgow, and appears to have entered the ministry. "He came to England soon after the death of James V of Scotland in 1542, when he presented to Henry VIII a 'plot' or map of the realm of Scotland, being a...
Another 73 words (5 lines of text) are included under the topic Early Nauavich Notables in all our PDF Extended History products and printed products wherever possible.

Migration of the Nauavich family to Ireland

Some of the Nauavich family moved to Ireland, but this topic is not covered in this excerpt.
Another 68 words (5 lines of text) about their life in Ireland is included in all our PDF Extended History products and printed products wherever possible.

Migration of the Nauavich family

The east coasts of the United States and Canada are still populated by many of the descendents of the Boernician-Scottish families who made that great crossing. They distributed themselves evenly when they first arrived, but at the time of the War of Independence those who remained loyal to England went north to Canada as United Empire Loyalists. This century, many of their ancestors have recovered their past heritage through highland games and other Scottish functions in North America. Many of these hardy settlers went on to make important contributions to the emerging nations in which they landed. Investigation of the origins of family names on the North American continent has revealed that many immigrants bearing the name Nauavich or a variant listed above: James Elder who settled in New Hampshire in 1718; along with Thomas, followed by David, Isaac, John, Robert, Samuel, and Thomas; but perhaps the most famous of the settlers was the Reverend John Elder who formed and was Captain of the Paxtang Rangers, known as the Paxtang Boys in 1753.