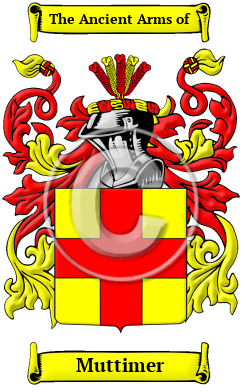 We must look to France for the early origins of the name Muttimer. For it is here that early records this family descends from Walter, Lord of St. Martin, Normandy who married a niece of the Duchess Gunnora c. 980. Roger, Sire de Mortimer was a leader of the army of Duke William and helped defeat the French in 1054. His son Roger de Mortimer was a leader at the Battle of Hastings and was granted a great barony for his efforts. From him, descended the Lords Mortimer of Wigmore, Earls of March. The name, however, is a reference to the family's place of residence prior to the Norman Conquest of England in 1066, Moretemer, in the Seine-Maritime region of Normandy. [1] Mortemer derives from the Old French "mort," meaning "dead," and "mer," meaning "sea."

Early Origins of the Muttimer family

The surname Muttimer was first found in Herefordshire where Ranulph de Mortimer (before 1070), who accompanied William the Conqueror was granted Wigmore Castle. The family became the Lords of Wigmore. The Hundredorum Rolls of 1273 revealed the following entries: Ralph de Mortimer in Lincolnshire; and Hugh de Mortuomari, and Lucia de Mortuomari in Herefordshire. [2] "The parish [of Woodham-Mortimer], called in some documents Little Woodham, derives its present adjunct from the family of Mortimer, to whom it anciently belonged." [3] Some of the family held a family seat at Attleburgh in Norfolk in ancient times. "It was anciently the capital of Norfolk, and the residence of Offa and Edmund, kings of East Anglia; and was subsequently the seat of the Mortimer family, the site of whose baronial hall is still encompassed by a moat. In the reign of Richard II., Robert de Mortimer founded a collegiate establishment, in the church of the Holy Cross, for a warden and four secular priests." [3] Some moved up to Scotland. "The first of the name recorded in Scotland is probably William de Mortimer who sometime after 1165 witnessed King William the Lion's confirmation of the charter of Philip de Euermel to Neubotel." [4]

Early History of the Muttimer family

Anglo-Norman names tend to be marked by an enormous number of spelling variations. This is largely due to the fact that Old and Middle English lacked any spelling rules when Norman French was introduced in the 11th century. The languages of the English courts at that time were French and Latin. These various languages mixed quite freely in the evolving social milieu. The final element of this mix is that medieval scribes spelled words according to their sounds rather than any definite rules, so a name was often spelled in as many different ways as the number of documents it appeared in. The name was spelled Mortimer, Mortimor and others.

Outstanding amongst the family at this time was Roger Mortimer, 1st Earl of March (c.1287-1330), an English nobleman in the Welsh marches, who surrendered to Edward II in 1321, and escaped from the Tower of London in 1324; and his son, Sir Roger de Mortimer, 2nd Earl of March, 4th Baron Mortimer, KG (1328-1360), an English nobleman and military commander during the Hundred Years' War; and his son, Edmund de Mortimer, 3rd Earl of March and jure uxoris Earl of Ulster (1352-1381); and his son, and Roger de Mortimer...
Another 88 words (6 lines of text) are included under the topic Early Muttimer Notables in all our PDF Extended History products and printed products wherever possible.

Migration of the Muttimer family

Because of the political and religious discontent in England, families began to migrate abroad in enormous numbers. Faced with persecution and starvation at home, the open frontiers and generally less oppressive social environment of the New World seemed tantalizing indeed to many English people. The trip was difficult, and not all made it unscathed, but many of those who did get to Canada and the United States made important contributions to the young nations in which they settled. Some of the first North American settlers with Muttimer name or one of its variants: John Mortimore, who came to Virginia in 1663; James Mortimer, who came to Pennsylvania in 1696; Margaret Mortimer, who came to Pennsylvania in 1683; George Mortimore, who arrived in Jamaica in 1716.