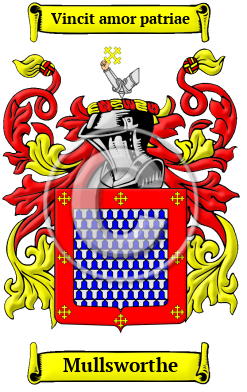 Today's generation of the Mullsworthe family bears a name that was brought to England by the migration wave that was started by the Norman Conquest of 1066. The Mullsworthe family lived in a place named Molesworth in Cambridgeshire or a place named Mouldsworth in Cheshire. The place-name Molesworth is derived from the Old English word Mulesword, which is composed of the elements mul, which means mule, and word, which means enclosure. The place-name Mouldsworth is derived from the Old English words molda, which means the crown of the head or top of the hill, and word, which again means enclosure. [1]

Early Origins of the Mullsworthe family

The surname Mullsworthe was first found in Huntingdonshire where they held a family seat as Lords of the Manor of Molesworth in that shire. Conjecturally they are descended from Eustace the Sheriff of Huntingdon who held his lands at the time of the taking of the Domesday Book from Countess Judith, a relation of Duke William of Normandy. "Sir Walter de Molesworth was one of Edward the 1st's Crusaders." [2]

Early History of the Mullsworthe family

Outstanding amongst the family at this time was Sir Hender Molesworth (1638-1689), 1st Baronet Molesworth of Pencarrow, Governor of Jamaica; Robert Molesworth (1656-1725), 1st Viscount Molesworth, British statesman, English and Irish landowner, Ambassador to Denmark, Ambassador to Sweden...
Another 38 words (3 lines of text) are included under the topic Early Mullsworthe Notables in all our PDF Extended History products and printed products wherever possible.

Migration of the Mullsworthe family

The unstable environment in England at this time caused numerous families to board ships and leave in search of opportunity and freedom from persecution abroad in places like Ireland, Australia, and particularly the New World. The voyage was extremely difficult, however, and only taken at great expense. The cramped conditions and unsanitary nature of the vessels caused many to arrive diseased and starving, not to mention destitute from the enormous cost. Still opportunity in the emerging nations of Canada and the United States was far greater than at home and many went on to make important contributions to the cultures of their adopted countries. An examination of many early immigration records reveals that people bearing the name Mullsworthe arrived in North America very early: Captain Moldsworth who settled in Boston Massachusetts in 1766; and members of the family who settled at Spring Garden in Jamaica and became known as Colonial Gentry..