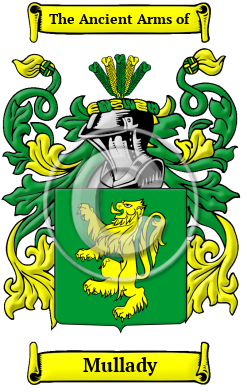 Early Origins of the Mullady family

The surname Mullady was first found in County Clare (Irish: An Clár) located on the west coast of Ireland in the province of Munster, where they held a family seat as a Dalcassian sept on the borders of Galway, neighbours of the Kennedys. After the Norman Conquest of England, was strongly influenced by the invasion of Strongbow in 1172 which was almost equal to the enormous Irish cultural impact on England Scotland, Wales and the whole of Europe before the Norman Conquest from the 1st to 7th centuries. Many Irish clanns, sept names were intermixed and family groupings became almost indistinguishable. The name claims direct descent from Maolaneididh, who was King of Conmacne and died with Brian Boru at the Battle of Clontarf in 1014.

Early History of the Mullady family

This web page shows only a small excerpt of our Mullady research. Another 89 words (6 lines of text) are included under the topic Early Mullady History in all our PDF Extended History products and printed products wherever possible.

More information is included under the topic Early Mullady Notables in all our PDF Extended History products and printed products wherever possible.

Migration of the Mullady family

Some of the first settlers of this family name or some of its variants were: Elisa Melody, who arrived in Philadelphia in 1811; James Melody, who was on record in New York in 1854; John Melody, who settled in New York, NY in 1858.