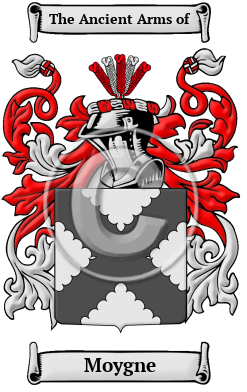 Early Origins of the Moygne family

The surname Moygne was first found in Dorset where they conjecturally claim descent from the tenant of lands consisting of 55 Lordships, held by William de Moyon of Moion, near St.Lo in Normandy, who was at Hastings a great Norman Baron who was recorded in the Domesday Book census of 1086. [1] Dunster Castle was his principal seat. He is buried in the priory in Bath. They became the Earls of Somerset and Dorset and the Barons of Okehampton.

"The family of Moygnes, Moynes, or de Monacho, held Owre Moyne, or Moyne-Ogres, very early after the Conquest. In the reign of Edward I. it was found that Ralph Moyne held this manor of Owers by service of serjeancy of the kitchen, and his ancestors had held it from the time of Henry I., by gift of that king, by said service. " [2]

Early History of the Moygne family

This web page shows only a small excerpt of our Moygne research. Another 74 words (5 lines of text) covering the years 1306, 1298, 1172 and 1612 are included under the topic Early Moygne History in all our PDF Extended History products and printed products wherever possible.

More information is included under the topic Early Moygne Notables in all our PDF Extended History products and printed products wherever possible.

Migration of the Moygne family to Ireland

Some of the Moygne family moved to Ireland, but this topic is not covered in this excerpt.
Another 60 words (4 lines of text) about their life in Ireland is included in all our PDF Extended History products and printed products wherever possible.

Migration of the Moygne family

Some of the first settlers of this family name or some of its variants were: John Moyne, listed as a British Alien in America in 1811; and William Moyne, who arrived in Philadelphia in 1847.