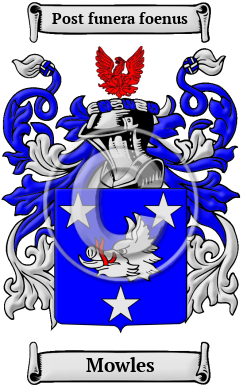 Early Origins of the Mowles family

The surname Mowles was first found in Roxburghshire, where they held a family seat as a Clan and conjecturally descended from Eustace the Sheriff of Huntingdon who held his lands of Molesworth in Huntingdon from Countess Judith a relative of Duke William of Normandy at the taking of the Domesday Book survey in 1086 A.D. A branch of this distinguished family moved north in 1124 in the train of King David of Scotland (Earl David of Huntingdon) and were granted lands in the upper half of Morebattle in Roxburghshire.

Early History of the Mowles family

Spelling variations of this family name include: Molle, Moll, Mow, Mowe and others.

More information is included under the topic Early Mowles Notables in all our PDF Extended History products and printed products wherever possible.

Migration of the Mowles family to Ireland

Some of the Mowles family moved to Ireland, but this topic is not covered in this excerpt.
Another 31 words (2 lines of text) about their life in Ireland is included in all our PDF Extended History products and printed products wherever possible.

Mowles Settlers in Australia in the 19th Century