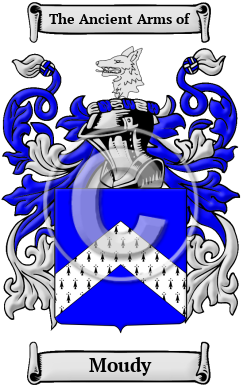 Early Origins of the Moudy family

The surname Moudy was first found in Devon, where the source Old English Bynames lists Alwine Modi as living there c. 1100-1130. A few years later in Nottinghamshire, Godric Modi was listed c.1150. [3]

"Moody is an ancient name that was represented in the reign of Edward I. by Mody and Mudy in Norfolk, and by Mody and Modi in Oxfordshire and Wilts (H. R.). Probably the Suffolk and Yorkshire name of Mudd or Mudde is another form of this name. Moody is a name that has also a home in the south and west of England in Hampshire and Somerset. William Moody possessed 29 acres in Partney, Lincolnshire, in 1616; and there was a John Moody, Esq., of Scremby, in this county, about 1750. The name of Moody was represented by Mody or Modi in the neighbouring county of Wiltshire 600 years ago." [4]

We would be remiss if we did not mention of the family in Scotland. There, the first on record was "Johannes Modi [who] served on an inquest made at Peebles in 1262." [5]

"William Mudy, merchant, had a safe conduct to visit England in 1365 with four companions, and William Mudy armiger, with two horsemen in 1367-1368. Sorlet, rector of Assend (Assynt) witnessed the charter of Bishop William (Mudy) to his brother-german Gilbert Mudy in 1455. Thome Mwdy and Robert Mwdy appear in Brechin in 1450, the former held land there in 1461 and in 1496 John Mwdy held land there. Mudy occurs in Perth in 1499, William Mwdye was chamberlain of Orkney in 1563, and Robert Mudie had a charter of part of the lands of Maistertoun in 1600. The direct line in Forfarshire endea on the death of John Mudie of Pitmuies in 1876. George Mudy was enrolled burgess of Dundee in 1576, and a burial place for Mudies was erected there in 1602." [5]

Early History of the Moudy family

The first dictionaries that appeared in the last few hundred years did much to standardize the English language. Before that time, spelling variations in names were a common occurrence. The language was changing, incorporating pieces of other languages, and the spelling of names changed with it. Moudy has been spelled many different ways, including Moody, Moodye, Moodie, Mudy, Mudie and others.

Another 27 words (2 lines of text) are included under the topic Early Moudy Notables in all our PDF Extended History products and printed products wherever possible.

Migration of the Moudy family to Ireland

Some of the Moudy family moved to Ireland, but this topic is not covered in this excerpt.
Another 328 words (23 lines of text) about their life in Ireland is included in all our PDF Extended History products and printed products wherever possible.

Migration of the Moudy family