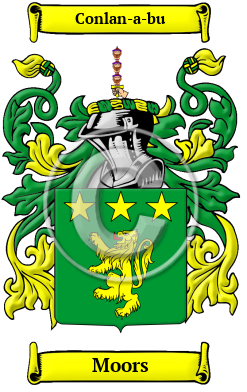 Early Origins of the Moors family

The surname Moors was first found in Munster, where the name was firmly established shortly after the Strongbow invasion of Ireland in 1172. [1]

'Aimergin Ua Mordha, A.D. 1026.' O'Mordha is Anglicised O'More and More, which has now usually become Moore, The O'Mores were a powerful sept in Ireland." [2]

"Donal Mór (d. 1194), son of Turlough, was the last King of North Munster. " [3] The Guinness or MacGunness family claim descent from Cionga, son of Rory Mór and had a similar coat of arms complete with a gold lion on a green shield denoting their heritage.

Moore or O'Moore were the hereditary Lords of Leix. Of this branch was Charles O'More who had a younger brother named Rory Oge who in 1587 was slain by the English.

The Moores of Rahinduffe, Queen's County are a branch of this previous family. Of note was Anthony O'Moore who joined with the O'Neills and defeated the English army in 1598. [3]

Early History of the Moors family

During the Middle Ages, a single person often had their name recorded by church officials and scribes many different ways. Names were typically spelt as they sounded, which resulted in many different spelling variations. The many versions of the name Moors to have been recorded over the years include: Moore, More, Moor, O'More, Moores, Mores, McMore, Moire, Moare, MacMoore, McMoir, Moir, Moors, O'Moore, O'Moire, McMoare, MacMoir, MacMoare, Mooer and many more.

Notable amongst the family up to this time was Rory O'More (d. 1557) and his son Rory Og O'More, who were both Irish leaders in the wars against the English (Tudor) Kings; Rory O'Moore (Roger O'Moore, O'More, Sir Roger Moore) (c.1600-1655), an Irish landowner of ancient lineage, most notable for being one of the four principal organizers of the Irish Rebellion of 1641; Rory "Roger" More...
Another 66 words (5 lines of text) are included under the topic Early Moors Notables in all our PDF Extended History products and printed products wherever possible.

In the United States, the name Moors is the 18,077th most popular surname with an estimated 2,487 people with that name. [4]

Moors migration to the United States +

In the 1840s, Ireland experienced a mass exodus to North America due to the Great Potato Famine. These families wanted to escape from hunger and disease that was ravaging their homeland. With the promise of work, freedom and land overseas, the Irish looked upon British North America and the United States as a means of hope and prosperity. Those that survived the journey were able to achieve this through much hard work and perseverance. Early immigration and passenger lists revealed many bearing the name Moors:

Moors Settlers in United States in the 17th Century

Moors Settlers in United States in the 18th Century

Moors Settlers in United States in the 19th Century

Moors Settlers in Australia in the 19th Century

Moors Settlers in New Zealand in the 19th Century