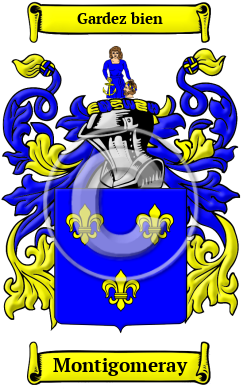 The Montigomeray family name comes originally from a place name in Normandy, such as Saint Foi de Montgomery. The name made its way to Scotland with the Normans, where it became Mac Gumaraid, in Gaelic.

Early Origins of the Montigomeray family

The surname Montigomeray was first found in Renfrewshire (Gaelic: Siorrachd Rinn Friù), a historic county of Scotland, today encompassing the Council Areas of Renfrew, East Renfrewshire, and Iverclyde, in the Strathclyde region of southwestern Scotland, where they were granted lands by Malcolm Canmore, King of Scotland.

The manor of Eaglesham became the Clan seat of the family for many centuries. Looking further back, we found Roger de Montgomery (died 1093?), who came from the Castle of Sainte Foi de Montgomery, in Lissieux, Normandy, arrived in England with William the Conqueror. [1]

Soon after the Battle of Hastings, Roger was granted lands on the Welsh Border in the County which later took his name, Montgomeryshire. However, Roger's grandson, Robert de Montgomery went to Scotland with Walter FizAlan, also of the Welsh border country, who became high Steward of Scotland and some claim the progenitor of the great Stewart Clan.

Although Normandy has so far been established as the origin of this family, a family legend related in a poem places their origin earlier, perhaps, even to Roman times: "A noble Roman was the Root, from which Montgomeries came, Who brought his legions from the war, and settled the same. Upon a hill twixt Rome and Spain. Gomericus by name; from which he and his offspring do their sire name still retain."

Early History of the Montigomeray family

Spelling variations of this family name include: Montgomery, Mongomery, Montgomerie, Mungummery and many more.

Notable among the family at this time was Alexander Montgomerie (c.1556-1610), Scottish Poet Laureate in the service of King James VI of Scotland best remembered for his allegorical poem 'The Cherrie and the Slae'; Sir James Montgomery, 4th Baronet (died 1694), the tenth laird of Skelmorlie, leader of the Montgomery Plot, a Jacobite scheme to restore King James VII...
Another 58 words (4 lines of text) are included under the topic Early Montigomeray Notables in all our PDF Extended History products and printed products wherever possible.

Migration of the Montigomeray family to Ireland

Some of the Montigomeray family moved to Ireland, but this topic is not covered in this excerpt.
Another 175 words (12 lines of text) about their life in Ireland is included in all our PDF Extended History products and printed products wherever possible.

Migration of the Montigomeray family

Some of the first settlers of this family name or some of its variants were: Adam Montgomery, who arrived in Boston in 1694; William Montgomerie, who came to New Jersey in 1701; Ester Montgomery, who settled in Virginia in 1724.