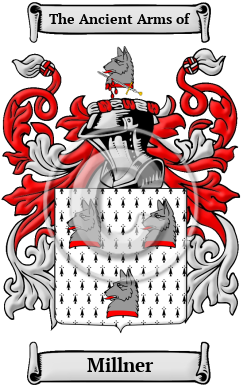 The Millner family name dates back to the ancient Anglo-Saxon culture of Britain. The name comes from when an early member worked as a person who was a milner or more commonly know as a miller. The name is derived from the Anglo-Saxon name myln which meant mill. [1]

Early Origins of the Millner family

The surname Millner was first found in the West Riding of Yorkshire at Appleton-Roebuck and Nun-Appleton, a township, in the parish of Bolton-Percy, W. division of Ainsty wapentake. "This place comprises by computation 2800 acres, chiefly the property of the Milner family, whose splendid mansion, Nun-Appleton Hall, stands in an extensive and finely wooded park, near the confluence of the rivers Ouse and Wharfe: the house was built by Thomas, Lord Fairfax, on the site of a Cistercian priory for nuns, founded by Alice de St. Quintin at the commencement of the thirteenth century." [3]

Early History of the Millner family

Millner has been spelled many different ways. Before English spelling became standardized over the last few hundred years, spelling variations in names were a common occurrence. As the English language changed in the Middle Ages, absorbing pieces of Latin and French, as well as other languages, the spelling of people's names also changed considerably, even over a single lifetime. Many variations of the name Millner have been found, including Milner, Milnor and others.

Distinguished members of the family include John Milner (1628-1702), an English clergyman, known as a nonjuring minister, scholar and opponent of John Locke. James Milner, 9th Seigneur of Sark (died 1730) bought the fief of Sark from John Johnson in 1723 for £5,000, and was Seigneur of Sark until 1730. Thomas Mulliner (c. 1545-1570), was the Oxford organist who compiled the commonplace Mulliner Book. Arthur Mulliner was the twentieth century name of a coachbuilding business founded in Northampton in 1760 which remained in family ownership. Henry Mulliner...
Another 86 words (6 lines of text) are included under the topic Early Millner Notables in all our PDF Extended History products and printed products wherever possible.

In the United States, the name Millner is the 8,115th most popular surname with an estimated 2,487 people with that name. [6]

Millner migration to the United States +

In an attempt to escape the chaos experienced in England, many English families boarded overcrowded and diseased ships sailing for the shores of North America and other British colonies. Those families hardy enough, and lucky enough, to make the passage intact were rewarded with land and a social environment less prone to religious and political persecution. Many of these families became important contributors to the young colonies in which they settled. Early immigration and passenger lists have documented some of the first Millners to arrive on North American shores:

Millner Settlers in United States in the 17th Century

Millner Settlers in United States in the 18th Century

Millner Settlers in Canada in the 18th Century

Millner Settlers in New Zealand in the 19th Century