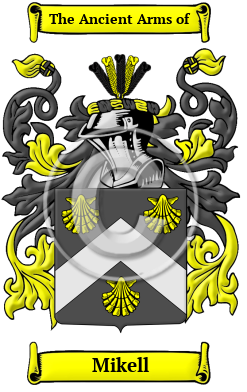 The distinguished surname Mikell is one of the many names that first came to England in the wake of the Norman Conquest of 1066. The name is derived from the given name "Michel," meaning "who is like God." [1] One source notes of another possible origin: "Anglo-Saxon mycel, great, or mickle, would be a tolerably satisfactory etymon, and this may in some instances be the origin of the surname; but I think in most cases it is derived from Michael, a very popular baptismal name in many countries, through its French form, Michel." [2]

Early Origins of the Mikell family

The surname Mikell was first found in many places throughout ancient Britain. As if to underscore this claim, the following entries were found in the Hundredorum Rolls of 1273: Hugh filius Micahel in Lincolnshire; Roger Michel in Norfolk; and as a forename, Mikael de Brackele in London. Years later, the Yorkshire Poll Tax Rolls of 1379 listed the following: Johannes Michelson; Thomas Michilson and Adam Michelson. [3]

"In 1198 Michael de Middelton' held a quarter of a carucate in Middleton, Wiltshire by service of keeping the king's wolf-hounds (Fees). About 1219 William Michel received per day for keeping two wolf-hounds and in 1236 Richard Michel held a cotset in Middleton for a similar service. The relationship between the three men is not stated but it appears a reasonable assumption that they were of the same family and that Michaelde Middleton had two sons who derived their surname Michel from their father's Christian name." [4]

The name was "distributed over England, but far more frequent in the south. Its home, par excellence, is in the county of Cornwall, where in nearly half the instances it is written Michell, though the pronunciation is the same. Its other homes are in Sussex, Wilts, and in the West Riding. Its prevalence in Cornwall is due to the fact that several parishes and places in the county bear the name of St. Michael in one form or another." [5]

Early History of the Mikell family

Outstanding amongst the family at this time was Jonathan Mitchel (1624?-1668), New England divine, born in Halifax, Yorkshire, about 1624, was son of Matthew Mitchel. He accompanied his parents to America in 1635, graduated at Harvard in 1647, and on 24 June 1649 preached at Hartford, Connecticut, with such acceptance that he was invited to succeed Thomas Hooker (1586-1647). This offer he declined. In May 1650 he was elected fellow of Harvard, and appears to have acted as tutor. In June 1661 he was one of the committee appointed to defend the privileges of the colony, then...
Another 97 words (7 lines of text) are included under the topic Early Mikell Notables in all our PDF Extended History products and printed products wherever possible.

In the United States, the name Mikell is the 8,904th most popular surname with an estimated 2,487 people with that name. [6]

Migration of the Mikell family to Ireland

Some of the Mikell family moved to Ireland, but this topic is not covered in this excerpt.
Another 79 words (6 lines of text) about their life in Ireland is included in all our PDF Extended History products and printed products wherever possible.

Mikell migration to the United States +

Mikell Settlers in United States in the 20th Century