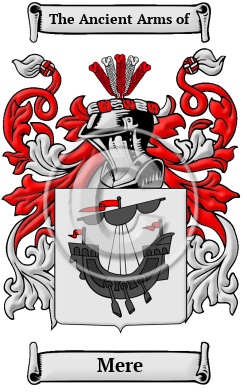 The founding heritage of the Mere family is in the Anglo-Saxon culture that once dominated in Britain. The name Mere comes from when one of the family worked as a person who held the office of mayor. The surname was originally derived from the Old English word maire, which referred to the officer who was in charge of executing summonses and other legal matters. Therefore, the original bearer of the surname Mere held the office of Mayor. [1]

Early Origins of the Mere family

The surname Mere was first found in Cheshire at Mere, a township, in the parish of Rosthern, union of Altrincham, hundred of Bucklow. The place name dates back to the Domesday Book of 1086 where it was first listed as Mera. [2]

Literally, the place name means "(place at) the pool or lake," from the Old English word "mere." [3] Alternatively, the surname could have originated at Mere in Wiltshire, a market-town and parish, and the head of a union, in the hundred of Mere. This parish was listed in the Domesday Book, but with the current spelling of Mere. [2]

In this case, "the name of this place is derived from the Saxon word Mæra, signifying bounds or limits, and indicates its situation on the borders of the counties of Wilts, Somerset, and Dorset. In 1253, permission was given by Henry III. to Richard, Earl of Cornwall, to build and fortify a castle on his manor of Mere, and the manor has ever since been attached to the duchy of Cornwall. " [4]

The family was listed in the Roll of Battle Abbey as companions to William the Conqueror. "The descendants of this Norman knight occupied a prominent position in Staffordshire, in the time of the early Plantagenets. William de Mere occurs as High Sheriff of that county, temp. Edward II., and in the next reign, Peter de la Mere filled the Speaker's chair in the House of Commons. At an early period, the family possessed the manor of Maer, co. Stafford, and are also found resident at Norton, in the Moors. The name is spelt, in ancient deeds, de Mere, de Mare, but the more recent orthography is Mayer. " [5]

For centuries the township of Lartington in the North Riding of Yorkshire belonged to the Maire family until the 16th century when it was passed by marriage to the Lawsons, of Brough. [4]

Early History of the Mere family

The first dictionaries that appeared in the last few hundred years did much to standardize the English language. Before that time, spelling variations in names were a common occurrence. The language was changing, incorporating pieces of other languages, and the spelling of names changed with it. Mere has been spelled many different ways, including Maire, Myer, Myers, Mair, Maires, Mayers, Meyers, Meire, Meir, Mere and many more.

More information is included under the topic Early Mere Notables in all our PDF Extended History products and printed products wherever possible.

Migration of the Mere family to Ireland

Some of the Mere family moved to Ireland, but this topic is not covered in this excerpt.
Another 85 words (6 lines of text) about their life in Ireland is included in all our PDF Extended History products and printed products wherever possible.

Mere migration to the United States +

Thousands of English families in this era began to emigrate the New World in search of land and freedom from religious and political persecution. Although the passage was expensive and the ships were dark, crowded, and unsafe, those who made the voyage safely were rewarded with opportunities unavailable to them in their homeland. Research into passenger and immigration lists has revealed some of the very first Meres to arrive in North America:

Mere Settlers in United States in the 17th Century

Mere Settlers in United States in the 18th Century