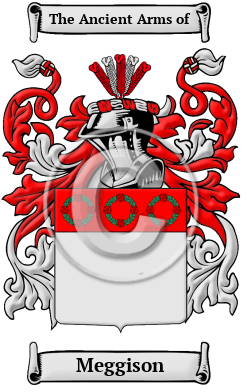 The rich and ancient history of the Meggison family name dates back to the time of the Anglo-Saxon tribes of Britain. It comes from the name Megg, which is a pet form of the female personal name Margaret. The name Meggison is a metronymic surname, which is derived from the name of the mother, and features the common patronymic suffix -son, which was most popular in the north of England and superseded other patronymic suffixes during the 14th century.

Early Origins of the Meggison family

The surname Meggison was first found in Oxfordshire where they held a family seat. Commonly used surname in ancient times, Meg-son was literally the son of Meg or Margeret. The name proliferated in Oxfordshire where John Megge was recorded in 1273. However, the popularity of the name diminished and by the year 1500 had become somewhat obscure. Modifications such as Meggison emerged and included others as Meggotson, and so on but the main stem of the family name moved north to Northumberland. It was here at Whalton that a " barony was conferred by the Conqueror upon Walter Fitz-William, to be held by the service of three knights' fees. It was afterwards possessed by the Fitz-Rogers, Fitz-Roberts, and others 3 in the reign of James I. was held by the crown 3 and was subsequently granted to the Meggison family. " [1]

Early History of the Meggison family

This web page shows only a small excerpt of our Meggison research. Another 49 words (4 lines of text) covering the years 137 and 1379 are included under the topic Early Meggison History in all our PDF Extended History products and printed products wherever possible.

Spelling variations in names were a common occurrence before English spelling was standardized a few hundred years ago. In the Middle Ages, even the literate spelled their names differently as the English language incorporated elements of French, Latin, and other European languages. Many variations of the name Meggison have been found, including Megson, Meggson, Meggison, Meggeson, Megginson, Meiggs, Meggenson, Meggy and many more.

More information is included under the topic Early Meggison Notables in all our PDF Extended History products and printed products wherever possible.

Meggison migration to the United States +

Families began migrating abroad in enormous numbers because of the political and religious discontent in England. Often faced with persecution and starvation in England, the possibilities of the New World attracted many English people. Although the ocean trips took many lives, those who did get to North America were instrumental in building the necessary groundwork for what would become for new powerful nations. Among the first immigrants of the name Meggison, or a variant listed above to cross the Atlantic and come to North America were :

Meggison Settlers in United States in the 19th Century