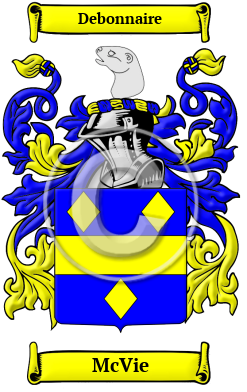 McVie is one of the names derived from the families of the ancient Dalriadan clans of Scotland. It is derived from the names of Macbeth and Bethune, or Beaton. The Macbeth and Bethune families, who were hereditary physicians to the Chiefs of Macdonald, practiced medicine on the Isles during the Middle Ages and their names merged in English into the one surname of Beaton. The Macbeths were concentrated in Islay and Mull, whereas the Beatons were concentrated in Skye.

However, the Beaton family was not restricted to the Isles and it later branched to other counties such as Fraser. Nonetheless, by the 17th century, the Beaton family "ceased to practice the healing art" and the last of the hereditary physicians was Niel Beaton who practiced medicine in about 1763. [1]

One source notes the Norman source of the family. "They claim descent from the house of Bethune, Barons of Bethune in Artois, Advocates or Protectors of Arras. This family was descended from the Carlovingian Counts of Artois, and ranked amongst the most potent and illustrious houses in Europe. The great Duke of Sully was one of its descendants. The Advocates of Arras possessed a barony in England from the Conquest, and left numerous descendants here. From the line of St. Omer, a branch of the same house, descended the Bagots, and Staffords, Duke of Buckingham in England, and many branches bearing the names of St. Omer and Arras." [2]

Early Origins of the McVie family

The surname McVie was first found in the Isle of Islay, where the first of the Islay family on record is Fercos Macbetha, who witnessed and probably wrote the Gaelic charter of 1408. Gilchristus M'Veig, surrigicus or surgeon in Islay is in record. Fergus M'Baithe in 1609 received from James VI certain lands in Islay in his official capacity as "principalis medici intra bordas Insularum," chief physician within the bounds of the Isles. His son, John Macbeath, succeeds in 1628 to the lands, but gave them over to the Thane of Cawdor in following year. The words "Leabar Giolla Colaim Meigbethadh" (book of Malcolm Macbeth) axe written on one of the Gaelic manuscripts in the National Library of Scotland, glossed in the same hand "Liber Malcolml Betune"

The Mull Beatons or Betons were hereditary physicians to the Macleans of Dowart. In 1572 Hector MacLaine of Dowart granted a charter to Andrew MacDonil Vikinollif (i.e. son of the doctor) and his heirs of the peuyland of Piencross and Brolas for his skill in the medical art. Martin says that Dr. Beaton was sitting on the upper deck of the "Florida" of the Spanish Armada when it blew up in Tobermory Bay in 1588 and he was thrown a good way off, but lived several years after. [1]

In England, the Yorkshire Poll Tax Rolls of 1379 included: Johannes Beton; Beton de Wath; and Beton, servant of Robert, filius Ade. The Hundredorum Rolls of 1273 had only one listing, that of John Betun, Oxfordshire. [3]

John Betoun was listed in Colchester in 1311 and Richard Beton was found in the Subsidy Rolls of Derbyshire in 1327. Interestingly, the name is "still used as a Christian name in Cornwall in 1630." [4]

Early History of the McVie family

Spelling in the medieval era was a highly imprecise process. Translation, particularly from Gaelic to English, was little better. For these reasons, early Scottish names are rife with spelling variations. In various documents McVie has been spelled Beaton, Beeton, MacBeth, MacBeaton, McBee, MacBee and others.

Notable amongst the Clan from early times was Janet Beaton, Lady of Branxholme and Buccleugh (1519-1569) an aristocratic Scottish woman, mistress of James Hepburn, Earl of Bothwell, had five husbands and was accused of being a witch, immortalized as Sir Walter Scott's Wizard Lady of Branxholm in his "Lay...
Another 48 words (3 lines of text) are included under the topic Early McVie Notables in all our PDF Extended History products and printed products wherever possible.

Migration of the McVie family to Ireland

Some of the McVie family moved to Ireland, but this topic is not covered in this excerpt.
Another 70 words (5 lines of text) about their life in Ireland is included in all our PDF Extended History products and printed products wherever possible.

McVie migration to the United States +

The hardy Scots who made the crossing settled all along the east coast of North America and in the great west that was just then opening up. At the time of the American War of Independence, many United Empire Loyalists moved north from the American colonies to Canada. Scottish national heritage became better known in North America in the 20th century through highland games and other patriotic events. An examination of immigration records and passenger ship lists revealed that people bearing the name McVie arrived in North America very early:

McVie Settlers in United States in the 18th Century

McVie Settlers in United States in the 19th Century

McVie Settlers in New Zealand in the 19th Century

Historic Events for the McVie family +