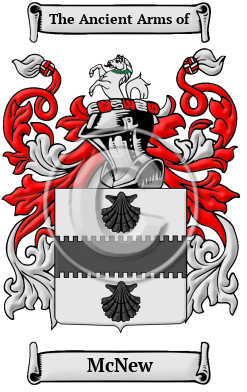 The name McNew comes from the ancient Anglo-Saxon culture of Britain. It was a name for a new person in town; a person who had just arrived to live in the area. The name McNew is derived from the Old English elements niwe, which means new, and cumen, which means come. The name is therefore transliterated as "newly come." Nickname surnames were frequently the result of a spontaneous reaction to a particular occasion or event. [1]

Early Origins of the McNew family

"Newcombe is an old Devonshire name. Richard Newcomb was twice mayor of Barnstaple in the reign of Henry VI. (G.). In the 16th and 17th centuries, a gentle family of Newcombe resided at Great Worthy, in Teignton - Drew. The name was well known in Exeter from the 16th to the 18th century, and Newcomb was the name of the Exeter mayors of 1612, 1703, and 1713. Ashburton also possessed a family of the name in the 16th century, Newcombe being the name of the Ashburton churchwardens of 1550 and 1569. The name still survives in Exeter and Barnstaple." [4]

We found this interesting passage: "Somewhere about the year 1670, there was born in Dartmouth a man who did more to lay the foundations of the present manufacturing greatness of the kingdom, and to advance the progress of industrial operations throughout the world, than any other who can be named. This was Thomas Newcomin, the inventor of the first practical working steam-engine, upon which, after it had been many years in useful operation, the work of James Watt was based. Newcomin, with whom was associated another Dartmouth man, named Cawley, perfected his engine in 1705. Hardly anything is known of him except that he was a locksmith and ironmonger, and that he died in 1729. The date of his birth is quite uncertain, but no doubt has ever been thrown upon his being a Dartmouth worthy. The house in which he lived was pulled down a few years since, and the materials worked into a house called ' Newcomin Cottage.' West-Countrymen are proud of the fact that to Newcomin the world owes the stationary steam-engine, and to Trevithick, of Hayle, in Cornwall, the locomotive. Newcomin's engine was a perfectly new machine, though it had to a certain extent a predecessor in the ingenious device of Savery of Shilston ; and Trevithick's engine was the first that proved the practicability of steam locomotion on railroads." [5]

Early History of the McNew family

This web page shows only a small excerpt of our McNew research. Another 57 words (4 lines of text) covering the years 1610, 1669, 1627 and 1695 are included under the topic Early McNew History in all our PDF Extended History products and printed products wherever possible.

Another 33 words (2 lines of text) are included under the topic Early McNew Notables in all our PDF Extended History products and printed products wherever possible.

In the United States, the name McNew is the 6,307th most popular surname with an estimated 4,974 people with that name. [6]

Migration of the McNew family to Ireland

Some of the McNew family moved to Ireland, but this topic is not covered in this excerpt. More information about their life in Ireland is included in all our PDF Extended History products and printed products wherever possible.

McNew migration to the United States +

To escape the unstable social climate in England of this time, many families boarded ships for the New World with the hope of finding land, opportunity, and greater religious and political freedom. Although the voyages were expensive, crowded, and difficult, those families that arrived often found greater opportunities and freedoms than they could have experienced at home. Many of those families went on to make significant contributions to the rapidly developing colonies in which they settled. Early North American records indicate many people bearing the name McNew were among those contributors:

McNew Settlers in United States in the 20th Century