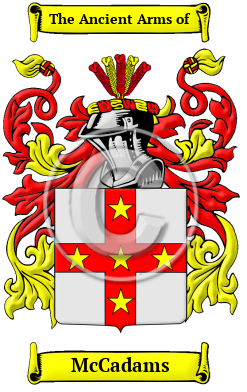 Early Origins of the McCadams family

The surname McCadams was first found in many counties throughout England and Scotland.

"Six centuries ago Adam probably ranked as second or third favourite among boys' names throughout England. In the north it attained a most remarkable pre-eminence." [1]

Another source notes the name is "rare in the eastern and northern counties. In the north, however, its place is sometimes taken by Adamson and Addison, as in the county of Durham. It is at present best represented in Buckinghamshire, Devon, Hampshire, and Staffordshire, and in the counties on the Welsh border, Shropshire and Monmouthshire. " [2]

Shortly after the Conquest, forenames were still rare, but for popular names such as this an appellation was typically added denoting "from where they hailed" or in some cases, an occupation. By example, Adam of Barking (fl. 1217?), was a Benedictine monk belonging to the abbey of Sherborne in Dorset; Adam of Buckfield (fl. 1300?), was an English commentator on Aristotle; Adam the Carthusian (fl. 1340) was described as a Carthusian monk and a doctor of theology; Adam of Domerham (d. after 1291), was a monk of Glastonbury, a native of Domerham, a village in Wiltshire belonging to Glastonbury Abbey; Adam de Marisco (d. 1257?), was a learned Franciscan, is said to have been a native of Somerset; and Adam of Orlton (d. 1345), successively bishop of Hereford, Worcester, and Winchester. [3]

As far as early rolls are concerned, England and Scotland had the lion's share of early entries.

In Scotland, "Adam sub-prior of Melrose became abbot of Cupar, 1189. Adam son of Adam was one of the witnesses to the charter by William Bruce to Adam of Carlyle of the lands of Kynemund, c. 1194-1214, and he also witnessed the resignation by Dunegal, son of Udard of a carucate of land in Warmanbie within the same period. Adam became abbot of Newbattle in 1201, and another Adam, a native of Lennox (Levenax), was a monk of great sanctity. " [4]

Early History of the McCadams family

It is only in the last few hundred years that the English language has been standardized. For that reason, early Anglo-Saxon surnames like McCadams are characterized by many spelling variations. As the English language changed and incorporated elements of other European languages, even literate people changed the spelling of their names. The variations of the name McCadams include: Adam, Adams, MacAdam, MacAdams, MacCaw and others.

Notable amongst bearers of this family name during their early history was William Adams (1585-1661), London Haberdasher born in Newport, Shropshire, who founded Adams' Grammar School in 1656; Sir Thomas Adams, 1st Baronet (1586-1667), Lord Mayor of the City of London and a Member of Parliament for the City of London from 1654-1655 and...
Another 54 words (4 lines of text) are included under the topic Early McCadams Notables in all our PDF Extended History products and printed products wherever possible.

Migration of the McCadams family to Ireland

Some of the McCadams family moved to Ireland, but this topic is not covered in this excerpt.
Another 107 words (8 lines of text) about their life in Ireland is included in all our PDF Extended History products and printed products wherever possible.

Migration of the McCadams family

Many English families tired of political and religious strife left Britain for the new colonies in North America. Although the trip itself offered no relief - conditions on the ships were extremely cramped, and many travelers arrived diseased, starving, and destitute - these immigrants believed the opportunities that awaited them were worth the risks. Once in the colonies, many of the families did indeed prosper and, in turn, made significant contributions to the culture and economies of the growing colonies. An inquiry into the early roots of North American families has revealed a number of immigrants bearing the name McCadams or a variant listed above: Andrew Adams, who arrived in Virginia in 1635; Dorothe Adams, who arrived in New England in 1635; Eede Adams, who came to Virginia in 1638; Christopher Adams, who came to Massachusetts in 1644.