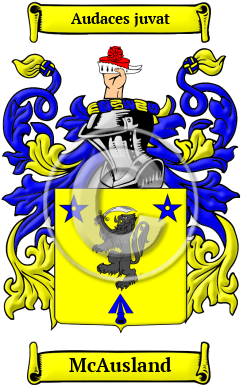 McAusland comes from the ancient Dalriadan clans of Scotland's west coast and Hebrides islands. The name comes from the Gaelic form of Absolom, which means peace. Historically this name can be found in The Bible, as the name of the third son of King David, who was killed for rebellion against his father.

Early Origins of the McAusland family

The surname McAusland was first found in Argyllshire (Gaelic erra Ghaidheal), the region of western Scotland corresponding roughly with the ancient Kingdom of Dál Riata, in the Strathclyde region of Scotland, now part of the Council Area of Argyll and Bute, where they held a family seat from early times and their first records appeared on the early census rolls taken by the early Kings of Britain to determine the rate of taxation of their subjects.

Early History of the McAusland family

This web page shows only a small excerpt of our McAusland research. Another 103 words (7 lines of text) covering the years 1421, 1692, 1766, 1692, 1716 and are included under the topic Early McAusland History in all our PDF Extended History products and printed products wherever possible.

Notable amongst the Clan from early times was Baron Alexander MacAuslan who reputedly killed the Duke of Clarence, brother of King Henry V of England at the Battle of Beauge in Normandy in 1421. Further to the south in Wales, William Caslon the Elder (1692-1766), the famous type-founder, was born in 1692 at Cradley, Worcestershire, near Halesowen, Shropshire. He served his apprenticeship to...
Another 61 words (4 lines of text) are included under the topic Early McAusland Notables in all our PDF Extended History products and printed products wherever possible.

Migration of the McAusland family to Ireland

Some of the McAusland family moved to Ireland, but this topic is not covered in this excerpt.
Another 74 words (5 lines of text) about their life in Ireland is included in all our PDF Extended History products and printed products wherever possible.

McAusland Settlers in Australia in the 19th Century