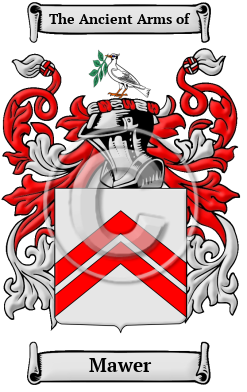 Early Origins of the Mawer family

In the north of England, the "aw" spelling was most common. [2] [1] The name Mawer, like many surnames, is most likely occupational in origin; in other words, the first bearer of the name took it because it pertained to his profession.

According to legend, an "Anglo-Saxon, soon after the Norman Conquest, acquired this name (Leofric the Mower) from his having overcome twenty men with a scythe." [3]

The name comes from the Old English word "mawan," meaning "to mow," so the first bearer of the name was most likely one who mowed for a living. The possibility also exists that there is another English Mower family whose name is a variation on the Irish name Moore, but this line of ancestry is rare, if it exists at all.

"Mawer was the name of a family that held much property in Winthorpe [Nottinghamshire] and in other places in the county 300 years ago. There were Mawers in Ereiston in the reign of Elizabeth I." [4]

In Scotland, the name is derived from the "Gaelic maor, a subordinate officer in various capacities, a steward. The Scots pronunciation is Mawr." [5] Here the name also includes the variants Maver and Mavor. "Mavor is a Speyside surname. Wille Mawar and Johnne Mawar were declared innocent of any art in the detention of King James III in Edinburgh Castle, 1482. Walter Mawer witnessed a bond of caution in 1564. John Mawar in Urquhart was warned to appear before the Lord Regent, 1574, and David Mawer of the Loch (Lochs near Urquhart) was slain by some Inneses, 1576. " [5]

Early History of the Mawer family

This web page shows only a small excerpt of our Mawer research. Another 64 words (5 lines of text) covering the years 1225, 1263 and 1332 are included under the topic Early Mawer History in all our PDF Extended History products and printed products wherever possible.

Spelling variations of this family name include: Mower, Mawer, Mowery, Mawery, Mawere, Mowere and others.

More information is included under the topic Early Mawer Notables in all our PDF Extended History products and printed products wherever possible.

Migration of the Mawer family to Ireland

Some of the Mawer family moved to Ireland, but this topic is not covered in this excerpt.
Another 41 words (3 lines of text) about their life in Ireland is included in all our PDF Extended History products and printed products wherever possible.

Mawer Settlers in Australia in the 19th Century