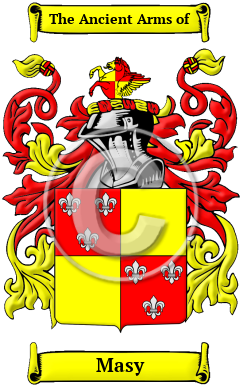 Early Origins of the Masy family

The surname Masy was first found in Cheshire where the one of the first records of the name was "Hugh Massie, who married Agnes, daughter and heir of Nicholas Bold, of Coddington. Their son William purchased the manor of Coddington in the eighteenth of Henry VI." [2]

A branch of the family held a family seat at Backford since early times. "During a great part of the 13th and 14th centuries, the manor [of Backford] was held by the Masseys, of Timperley; about the year 1580 it was sold to Thomas Aldersey." [3]

Birkenhead in Cheshire was another ancient family seat. "A priory for sixteen Benedictine monks was founded [in Birkenhead] about 1150, in honour of St. Mary and St. James, by Hamon de Massey, third Baron of Dunham-Massey." [3]

Early History of the Masy family

Before the last few hundred years the English language had no fixed system of spelling rules. For that reason, spelling variations occurred commonly in Anglo Norman surnames. Over the years, many variations of the name Masy were recorded, including Massey, Massie, Macy, Macey and others.

Outstanding amongst the family at this time was Sir Edward Massey (c. 1619-1674), fifth son of John Massey of Coddington, an English soldier and politician who sat in the House of Commons between 1646 and 1674, he fought for the Parliamentary cause the First and Second English Civil Wars before changing allegiance and fighting for King Charles II during Third Civil War. Eyre Massey, 1st Baron Clarina (1719-1804), the Irish general, born on 24 May 1719, was fifth son of Colonel Hugh Massey of Duntryleague, co. Limerick, and his wife Elizabeth, fourth daughter of the Right Hon. George Evans, father of George...
Another 193 words (14 lines of text) are included under the topic Early Masy Notables in all our PDF Extended History products and printed products wherever possible.

Migration of the Masy family to Ireland

Some of the Masy family moved to Ireland, but this topic is not covered in this excerpt.
Another 89 words (6 lines of text) about their life in Ireland is included in all our PDF Extended History products and printed products wherever possible.

Migration of the Masy family

The unstable environment in England at this time caused numerous families to board ships and leave in search of opportunity and freedom from persecution abroad in places like Ireland, Australia, and particularly the New World. The voyage was extremely difficult, however, and only taken at great expense. The cramped conditions and unsanitary nature of the vessels caused many to arrive diseased and starving, not to mention destitute from the enormous cost. Still opportunity in the emerging nations of Canada and the United States was far greater than at home and many went on to make important contributions to the cultures of their adopted countries. An examination of many early immigration records reveals that people bearing the name Masy arrived in North America very early: Edward Massey settled in Virginia in 1634; Jeffrey Massey settled in Salem in 1630; Robert Massey settled in Virginia in 1653; Thomas Massey settled in Barbados in 1668.