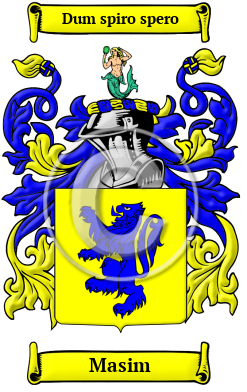 Masim is a name that first reached England following the Norman Conquest in 1066. It is a name for a stone-mason. The name was originally derived from the Old English or Old French word masson. [1]

Early Origins of the Masim family

The surname Masim was first found in various counties and shires throughout Britain but one of the oldest was found in Kent on the Isle of Thanet. One of the earliest records on the name was found in London c. 1130 when John Macun was listed there at that time. A few years later, Ace le mazun was listed in the Pipe Rolls of Herefordshire in 1193 and Roger le Mason was listed in Oxfordshire in 1200. The Feet of Fines of Essex lists Godrey le Mascun in 1203 and Adam le Machon was listed in the Assize Roles of Northumberland in 1279. [2] The Hundredorum Rolls of 1273 list Gotte le Mazoun in Huntingdonshire; and Nicholas le Macun in Buckinghamshire. The Yorkshire Poll Tax Rolls of 1379 list Willelmus Mason, mason. [3] About this time and perhaps before, Scotland had early listings of the name. They include: Richard the Mason, burgess of Aberdeen in 1271; John le Massum of Gascony who had claim against the bishop of St. Andrews in 1288; and William dictus Masceon who had a charter of land in the burgh of Berwick in 1307. [4]

Early History of the Masim family

Anglo-Norman names tend to be marked by an enormous number of spelling variations. This is largely due to the fact that Old and Middle English lacked any spelling rules when Norman French was introduced in the 11th century. The languages of the English courts at that time were French and Latin. These various languages mixed quite freely in the evolving social milieu. The final element of this mix is that medieval scribes spelled words according to their sounds rather than any definite rules, so a name was often spelled in as many different ways as the number of documents it appeared in. The name was spelled Mason, Masson and others.

Outstanding amongst the family at this time was John Mason (1586-1635), born in King's Lynn, became Governor of Newfoundland in 1615, and was one of the founders of New Hampshire; George Mason I (1629-1686) from Pershore, Worcestershire, who arrived at Norfolk, Virginia on the ship Assurance in 1652, he was great-grandfather of George Mason IV, a Founding Father of the United States; and his son, George Mason II (1660-1716), an early American planter and statesman; and his son...
Another 78 words (6 lines of text) are included under the topic Early Masim Notables in all our PDF Extended History products and printed products wherever possible.

Migration of the Masim family to Ireland

Some of the Masim family moved to Ireland, but this topic is not covered in this excerpt.
Another 84 words (6 lines of text) about their life in Ireland is included in all our PDF Extended History products and printed products wherever possible.

Migration of the Masim family

Because of the political and religious discontent in England, families began to migrate abroad in enormous numbers. Faced with persecution and starvation at home, the open frontiers and generally less oppressive social environment of the New World seemed tantalizing indeed to many English people. The trip was difficult, and not all made it unscathed, but many of those who did get to Canada and the United States made important contributions to the young nations in which they settled. Some of the first North American settlers with Masim name or one of its variants: Anne Mason who arrived in Virginia in 1635; Charles Mason, who came to Virginia in 1637; Edward Mason, who came to in 1648; Henry Mason who arrived in Virginia in 1646.