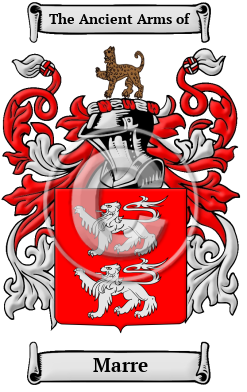 The Marre family saga is rooted in the people of the Pictish Clan of ancient Scotland. The Marre family lived in a place called Mar, which was in the county of Aberdeen. It may come from the Old Norse word marr, which was an extremely rare word, that was usually associated with the sea, but sometimes referred to a marsh or a fen. In this sense, Marre would be a habitational name. [1] [2]

Early Origins of the Marre family

The surname Marre was first found in the West Riding of Yorkshire at Marr, a parish, in the union of Doncaster, N. division of the wapentake of Strafforth and Tickhill. [3]

However the lion's share of the family claim Scotland as their ancient homeland. Here Mar is a parish in Aberdeenshire where "the name is of local or territorial origin from the district in Aberdeenshire so named." [5]

This same source postulates that the name was "probably also from Marr in Yorkshire. In the Yorkshire dialect mar is used of 'marshy land, sodden or reedy ground.' " [5]

"In 1235 William de Mer, perhaps the earliest of the name in record [in Scotland], witnessed a grant by Radulf Manus to the Abbey of Kelso. Gilberd or Gilbert de Mar of Fifeshire, John of Mar, bailiff of Linlithgow, and James de Mer of Aberdeenshire, all rendered homage in 1296 [to King Edward I of England]. Richard Mar was present at inquest made at St. Andrews, 1302-1303. John de Marr, c. 1316, witnessed a charter of the lands of Linton-Rothirrik, and David de Marre was king's messenger in 1327. A canonry of Glasgow was granted to John de Mair, chaplain to Joan, queen of Scotland, 1346. Roger dictus Mer held land of the Abbey of Arbroath in 1329, Donald de Marre is mentioned in 1353 as late archdeacon of Brechin, Master David of Mer was treasurer of Moray, 1358, and Alexander de Marr was custumar of Dundee in 1359. " [5]

To better understand the York, England and Scotland relationship in the family, we found "William Mar, ninth Earl of Mar (d. 1281?), the son of Duncan, eighth earl of Mar, and grandson of Morgrund, fifth earl. He succeeded his father in or before 1237, when he attested at York the agreement between Henry III of England and Alexander II of Scotland. His right of succession was contested by Alan Durward, who asserted that William's father and grandfather were both of illegitimate birth, and that he ought to succeed as lawful heir. But apparently the case was arranged on the footing of an agreement which had been made about 1228 with Thomas Durward, father of Alan, who received a large accession of territory in Mar ; and the earldom remained with William de Mar. In 1249, during the minority of Alexander III, he was appointed one of the regents of Scotland." [6]

William's son, Donald Mar, tenth Earl of Mar (d. 1297), was knighted by Alexander III at Scone in 1270, and succeeded as earl before 25 July 1281, when he took oath at Roxburgh to observe the treaty for the marriage of Princess Margaret of Scotland and Eric, king of Norway. [6]

Early History of the Marre family

Prior to the invention of the printing press in the last hundred years, documents were basically unique. Names were written according to sound, and often appeared differently each time they were recorded. Spelling variations of the name Marre include Marr, Mar, Marre, Mare and others.

More information is included under the topic Early Marre Notables in all our PDF Extended History products and printed products wherever possible.

Marre migration to the United States +

The freedom of the North American colonies was enticing, and many Scots left to make the great crossing. It was a long and hard journey, but its reward was a place where there was more land than people and tolerance was far easier to come by. Many of these people came together to fight for a new nation in the American War of Independence, while others remained loyal to the old order as United Empire Loyalists. The ancestors of Scots in North America have recovered much of this heritage in the 20th century through Clan societies and other such organizations. A search of immigration and passenger lists revealed many important and early immigrants to North America bearing the name of Marre:

Marre Settlers in United States in the 19th Century

Marre Settlers in United States in the 20th Century