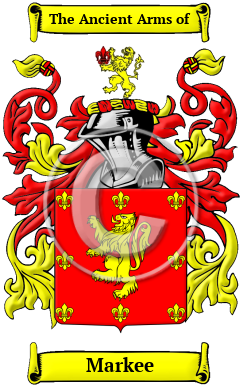 The illustrious surname Markee finds its origin in the rocky, sea swept coastal area of southwestern England known as Cornwall. Although surnames were fairly widespread in medieval England, people were originally known only by a single name. The process by which hereditary surnames were adopted is extremely interesting. As populations grew, people began to assume an extra name to avoid confusion and to further identify themselves. Under the Feudal System of government, surnames evolved and they often reflected life on the manor and in the field. Lords and their tenants often became known by the name of the feudal territory they owned or lived on. Unlike most Celtic peoples, who favored patronymic names, the Cornish predominantly used local surnames. This was due to the heavy political and cultural influence of the English upon the Cornish People at the time that surnames first came into use. Local surnames were derived from where a person lived, held land, or was born. While many Cornish surnames of this sort appear to be topographic surnames, which were given to people who resided near physical features such as hills, streams, churches, or types of trees, many are actually habitation surnames derived from lost or unrecorded place names. The name Markee is a local type of surname and the Markee family lived on a boundary between two districts. Literally the name meant "dweller by the boundary" from the Old English word "mearc." [1]

Early Origins of the Markee family

The surname Markee was first found in Essex where "Adelolfus de Merc held lands under Eustace Earl of Boulogne. His estate of Tollesbury was still held by by one of his descendants, Henry de Merk, in 1251. This name, variously given as Merkes, Markes, and Mark, was derived from Marc in Normandy. Geoffrey de Marco and his sons are mentioned by Ordericus Vitalis (591). It is still retained by many places in Essex. There is Le Marck, or Marks Hall, in the parish of Leyton, Mark’s Tay (held under the Mandevilles “from the earliest times”), the parish of Markes Hall, Merks in Dunmow (possessed since the days of the Conqueror), and others. The family was wealthy, numerous, and greatly sub-divided. Aitropus, or Eutropius, and Simon de Merc occur in the Rotuli Curiæ Regis of 1194-98: and the latter is also entered in the Monasticon as a benefactor of Thornton Abbey. He and his son Ingelram held Marks, in the parish of Great Dunmow, of the King in capite of his Honour of Bologne, and had certainly three, if not more, successors in the male line. " [2]

Early History of the Markee family

This web page shows only a small excerpt of our Markee research. Another 254 words (18 lines of text) covering the years 1291, 1226, 1296 and are included under the topic Early Markee History in all our PDF Extended History products and printed products wherever possible.

More information is included under the topic Early Markee Notables in all our PDF Extended History products and printed products wherever possible.

Migration of the Markee family to Ireland

Some of the Markee family moved to Ireland, but this topic is not covered in this excerpt.
Another 78 words (6 lines of text) about their life in Ireland is included in all our PDF Extended History products and printed products wherever possible.

Markee migration to the United States +

An investigation of the immigration and passenger lists has revealed a number of people bearing the name Markee:

Markee Settlers in United States in the 19th Century