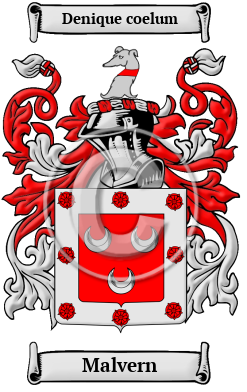 The land of moorland bogs and fields of heather is the ancient homeland to the distinguished surname Malvern. In Scotland, hereditary surnames were adopted according to fairly general rules and during the late Middle Ages, names that were derived from specific localities became increasingly widespread. Local names originally denoted the proprietorship of the village or estate. The Malvern family originally lived in the village of Melville, in the county of Midlothian (now part of the region of Lothian).

Early Origins of the Malvern family

The surname Malvern was first found in Midlothian. The Melville family resided in this county as early as the mid-12th century, when King Malcolm IV of Scotland granted them the lands of Melville in 1160.

Early History of the Malvern family

Notable among the family at this time was Sir James Melville (1535-1617), Scottish diplomatist and memoir writer, was the third son of Sir John Melville, laird of Raith in the county of Fife; Andrew Melville (1545-1622), Scottish scholar, theologian and religious reformer; Alexander Melville (also Alexander Leslie), 5th Earl of Leven (1695-1754), Scottish peer, Lord High Commissioner (1741-1753), Grand Master of the Grand Lodge of Scotland (1741-1742)...
Another 67 words (5 lines of text) are included under the topic Early Malvern Notables in all our PDF Extended History products and printed products wherever possible.

Migration of the Malvern family to Ireland

Some of the Malvern family moved to Ireland, but this topic is not covered in this excerpt.
Another 67 words (5 lines of text) about their life in Ireland is included in all our PDF Extended History products and printed products wherever possible.

Malvern Settlers in Australia in the 19th Century