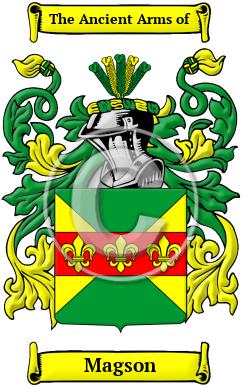 The surname Magson is a nickname of Madge and baptismal name as in 'the son of Margaret.' [1]

Early Origins of the Magson family

The surname Magson was first found in Surrey where William Maggard was listed in the Subsidy Rolls of 1327. [2]

From this earliest entry we must move to Yorkshire to find the next two entries. It is here that Willelmus Machet was found in the Yorkshire Poll Tax Rolls of 1379 [1] and later, Samuel Maggett was listed in 1647. [2]

Early History of the Magson family

Magson has been spelled many different ways. Before English spelling became standardized over the last few hundred years, spelling variations in names were a common occurrence. As the English language changed in the Middle Ages, absorbing pieces of Latin and French, as well as other languages, the spelling of people's names also changed considerably, even over a single lifetime. Many variations of the name Magson have been found, including Machet, Machett, Madgett, Madget, Machitt, Machtit, Matchet and many more.

Distinguished members of the family include John Machet, Rector of Lambeth, county Surrey, in 1526. Nicholas Madgett of Madget ( fl. 1799), was an Irish adventurer, born at Kinsale, co. Kerry, and was according to a secret correspondent of Lord Castlereagh-probably Samuel Turner in 1799, at the time of Humbert's expedition to Ireland, near sixty years of age, and had lived for forty years in France. He was employed in the French foreign office in 1794 and the succeeding years in negotiating measures between the French government and Irish politicians for a French invasion of Ireland. In 1794 he gave William Jackson (1737?-1795)...
Another 364 words (26 lines of text) are included under the topic Early Magson Notables in all our PDF Extended History products and printed products wherever possible.

Migration of the Magson family to Ireland

Some of the Magson family moved to Ireland, but this topic is not covered in this excerpt.
Another 103 words (7 lines of text) about their life in Ireland is included in all our PDF Extended History products and printed products wherever possible.

Magson migration to the United States +

In an attempt to escape the chaos experienced in England, many English families boarded overcrowded and diseased ships sailing for the shores of North America and other British colonies. Those families hardy enough, and lucky enough, to make the passage intact were rewarded with land and a social environment less prone to religious and political persecution. Many of these families became important contributors to the young colonies in which they settled. Early immigration and passenger lists have documented some of the first Magsons to arrive on North American shores:

Magson Settlers in United States in the 17th Century

Magson Settlers in United States in the 19th Century

Magson Settlers in New Zealand in the 19th Century