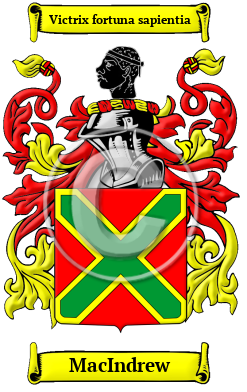 The history of the MacIndrew family begins among the Pictish clans ancient Scotland. The name MacIndrew comes from the baptismal name Andrew which in Greek means manly. The name was popular as both a personal name and a surname, likely because it was the name of Scotland's patron saint. In Gaelic the name is Aindrea and Anndra which again means manly.

Early Origins of the MacIndrew family

The surname MacIndrew was first found in Caithness (Gaelic: Gallaibh), the northern tip of Scotland, a Norse/Viking controlled region from the 9th century, which became the Earldom of Caithness.

This family was strongly associated with the Clan Ross. It was originally known as the Clan Siol Andrea, meaning the race of Andrew. However, from about the year 1100 the Andrews moved south to the Dumfriesshire area of southwest Scotland. Duncan Andrew, Chief of the Clan, rendered homage to King Edward I of England in 1296. [1]

Some of the family were found further south in England, specifically at Shotley in Northumberland where "Shotley Hall is said to have been built by Dr. Andrews, physician to the first royal Duke of Cumberland." [2]

Sir Edmund Andros (1637-1714) was born in London and rose to become an English colonial administrator in North America. The 1689 Boston revolt was directly attributed to his actions in New England.

Early History of the MacIndrew family

In the Middle ages, spelling and translation were not yet regulated by any general rules. spelling variations in names were common even among members of one family unit. MacIndrew has appeared Andrew, Andrews, MacAndrew, Androw, Androe, Andro and many more.

Notable amongst the Clan at this time was Alexander Andrew, Sergeant of Aberdeen; Phineas Andrews (ca. 1600-1661), an English politician who sat in the House of Commons from 1660 to 1661; and Sir Thomas Andrewes (died 1659), English financier, supporter of the parliamentary cause during the English Civil War, Commissioner at the High Court of Justice for the trial of Charles I, Lord Mayor of London (1649-1650.) Laurence Andrewe (fl. 1510-1537), was a French translator and printer, a native of Calais and Thomas Andrewe (fl. 1604)...
Another 85 words (6 lines of text) are included under the topic Early MacIndrew Notables in all our PDF Extended History products and printed products wherever possible.

Migration of the MacIndrew family to Ireland

Some of the MacIndrew family moved to Ireland, but this topic is not covered in this excerpt.
Another 77 words (6 lines of text) about their life in Ireland is included in all our PDF Extended History products and printed products wherever possible.

Migration of the MacIndrew family

Faced by this persecution and the generally unstable political climate of those days, many Scots chose to leave their homeland for Ireland, Australia, and North America in search of greater opportunity and freedom. The colonies across the Atlantic were the most popular choice, but a passage there was neither cheap nor easily suffered. Passengers arrived sick and poor, but those who made it intact often found land and more tolerant societies in which to live. These brave settlers formed the backbone of the burgeoning nations of Canada and the United States. It is only this century that the ancestors of these families have begun to recover their collective identity through the patriotic highland games and Clan societies that have sprung up throughout North America. Research into early immigration and passenger lists revealed many immigrants bearing the name MacIndrew: Ralph Andrew, son of Thomas Andrew of Carlisle, who landed in America in 1664; John Andrew, son of Sir John Andrew of Charlton, landed in 1650; William Andrew settled in Cambridge, Massachusetts, a ships captain who settled in 1634.