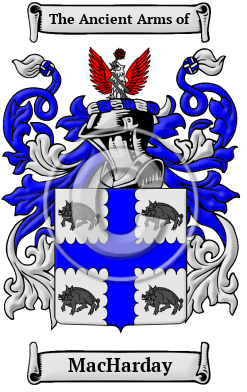 The MacHarday family finds its ancestral home among the rugged mountains and sea-swept Hebrides islands of Scotland's west coast. In that area, once known as the kingdom of Dalriada, MacHarday evolved as a nickname for a brave person. This surname is a nickname, which belongs to the category of hereditary surnames. Nicknames form a broad and miscellaneous class of surnames, and can refer directly or indirectly to one's personality, physical attributes, mannerisms, or even their habits of dress. The surname MacHarday comes from the Old French and Old English word hardi, which means brave. [1]

Early Origins of the MacHarday family

The surname MacHarday was first found in Lanarkshire (Gaelic: Siorrachd Lannraig) a former county in the central Strathclyde region of Scotland, now divided into the Council Areas of North Lanarkshire, South Lanarkshire, and the City of Glasgow.

Early History of the MacHarday family

In the Middle Ages, the translation between Gaelic and English was not a highly developed process. Spelling was not yet standardized, and so, an enormous number of spelling variations appear in records of early Scottish names. MacHarday has appeared as Hardy, Hardie, Hardey, MacHardy and others.

Notable amongst the family at this time was Nathaniel Hardy (1618-1670), Dean of Rochester, son of Anthony Hardy of London, born in the Old Bailey, 14 Sept. 1618, and was baptised in the church of St. Martin's, Ludgate. [7] Samuel Hardy (1636-1691), English nonconformist minister, born at Frampton, Dorsetshire. [7] Sir Thomas Hardy (1666-1732), English vice-admiral, grandson of John Le Hardy (1606-1667), solicitor-general of Jersey, son of John Le...
Another 66 words (5 lines of text) are included under the topic Early MacHarday Notables in all our PDF Extended History products and printed products wherever possible.

Migration of the MacHarday family to Ireland

Some of the MacHarday family moved to Ireland, but this topic is not covered in this excerpt.
Another 110 words (8 lines of text) about their life in Ireland is included in all our PDF Extended History products and printed products wherever possible.

Migration of the MacHarday family

Ancestors of many of the Dalriadan families who crossed the Atlantic still live along the east coast of the United States and Canada. Some Scottish settlers arrived in Canada during the American War of Independence as United Empire Loyalists, while others stayed south to fight for a new nation. The descendants of Scottish settlers in both countries began to rediscover their heritage in the 19th and 20th centuries through Clan societies and highland games. An inquiry into the early roots of North American families has revealed a number of immigrants bearing the name MacHarday or a variant listed above: Elizabeth Hardey settled in Rappahannock Virginia in 1725; Robert Hardey settled in Maryland in 1774; John Hardy settled in Salem in 1630; Thomas Hardy settled in Virginia in 1642.